In celebration of International Video Game Day 2017, I decided to play an arcade title ported to the Nintendo Entertainment System. You can’t get much more video game than that. Seicross was released by Nihon Bussan for the NES in 1988, four years after it made its arcade debut in 1984. The arcade posters contained the tag line, “Evade enemy chase and attack the fort!! Infiltrate the mysterious base!!!” I am thankful I found that poster to put some of the pieces of the game together. Even with it, this game is crazy.

Seicross is a cluster of chaos. The player’s objective is to pick up these little waving blue guys hanging out on what looks like a motosport race track and to score big points by shooting things using their… bike? You have a fuel meter keeping track of your remaining fuel. If you run out of fuel, your bike explodes. The game moves at the speed of the level, whatever the level designers felt was an adequate challenge. If you’re not ready for it, you’ll run into a wall. If this were not enough, the game designers threw a ton of other random characters on bikes that just like to bump into you and get in the way. If you’re not careful, they’ll distract you and run you into dead-ends and walls. It’s comical to watch them run into dead-ends and walls themselves. 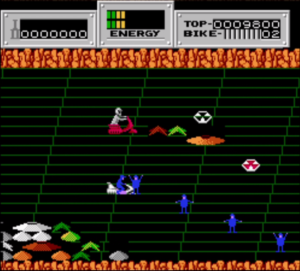 Pick up the blue guys for points and radioactive buttons for energy.

The music makes you feel like you’re in the middle of a futuristic county fair carnival and the visuals are intensely bright and colorful. The sound effects and explosions are crisp and satisfying. Nothing about Seicross seems to take itself seriously though it is clear a lot of time was spent making it the fine game it is. I am not sure if my impression of the game would be different if I were living in Japan in the era it was created. It is possible I am missing some artistic cultural details that would make me switch my feelings on this title. Right now I respect it almost as a slap-stick comedy of the arcade form. I wonder if that was what the designers had intended, or if they were going for something much more serious or vastly different to my current impression. 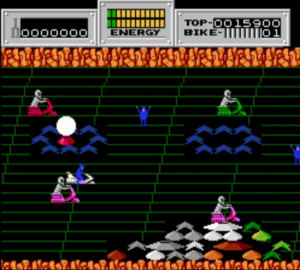 “Out of my way! I just want to get to Starbucks for my morning latte!”

Like many arcade games of the era in which it was released, Seicross in many ways actually does its best to be unfair. The purpose of this game was to be just fun enough where you keep playing, but just hard enough where you are constantly having to inject the arcade machine with more of your hard-earned quarters. They succeeded marvelously on both fronts.

Seicross is hard and confusing, but so much fun. I want to keep playing to get an ever larger high score and see if I can make it to the next level. There is a multiplayer mode where you can play with a friend. It would have been better if this option allowed two players to play simultaneously on the same playfield, but like many NES games it only allows players to play one at a time and keeps track of their scores together. 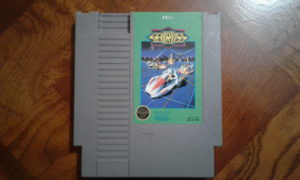 I purchased my copy of Seicross from Amazon for under ten dollars. It looks like there are many copies still selling for a very cheap price. If you are interested in collecting for the NES, this is an easy game to get your hands on. It has also surprisingly been one of my NES titles I keep coming back to whenever I browse through my game collections for a game to play ever since I got it.