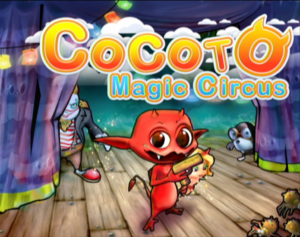 This is the worst game ever. I hate this game! It’s so stupid! – my wife.

Cocoto Magic Circus is a light-gun mini-game shooter released for the Nintendo Wii in 2008. It was developed by Neko Entertainment and published by Conspiracy Entertainment. It follows the same classic formula of many of the light-gun mini-game shooters of the era. The game case boasts, “40 mini-games, each more original than the last!” All of the games are point and shoot with lots of similar patterns strewn throughout all of them making the advertising deceptive at best. 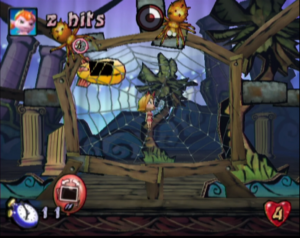 Save Fairy from the spiders before she’s eaten!

The beginning cutscene handily tells the backstory without any words. Four monster-looking friends: Cocoto, Baggy, Neuro, and Shiny, according to the game manual, and their friend Fairy who is a pixie, meet a clown in the woods. He looks creepy as all get-out, but instead of running away they stick around to be friendly with him. The clown kidnaps Fairy, and the others race to help rescue her. Theoretically the objective of the game is to rescue Fairy by shooting her captors in the various mini-games. While some mini-games had us shooting bad guys to keep them away from Fairy, there was no point at the end of any mode of gameplay where Fairy ever regained her freedom that I noticed. The competing monsters would just hop up on the 1st, 2nd, and 3rd place stands at the end of the game to show how they placed in the Tournament or Duel modes. 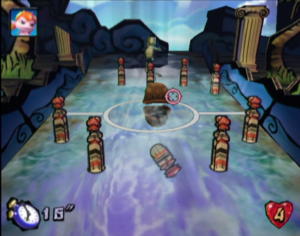 This is air hockey… with guns. This shouldn’t be a mini-game, but a full featured title.

There are three multiplayer modes: Arcade, Tournament, and Duel. In arcade mode, one or two players play simultaneously and cooperatively until they run out of lives. Lives may be replenished in periodic bonus rounds. Tournament mode is a little bit of a misnomer that actually means hot seat in the case of Cocoto Magic Circus. In tournament mode players pass around one controller and play the mini-games one player at a time competitively. Some mini-games actually lend themselves to this mode of play better, especially for players who are less experienced with aiming a wiimote. This mode allows 2, 3, or 4 players to play. Duel mode allows 2 or 4 players to play competitively and simultaneously for a set number of games. 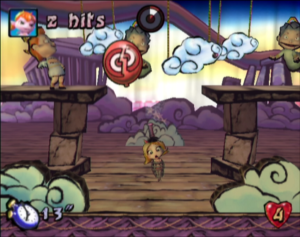 Try not to shoot Fairy in the face. Oops, instant mini-game over.

As I alluded earlier, some of the mini-games can be rather frustrating when playing simultaneously with another player. There are a handful of mini-games where all players are aiming at the same target and they only are given one shot to hit it. If all miss, the mini-game is failed. If an opponent hits the target first, the mini-game ends and you won’t get a chance to hit it as well. Then at the end of this short “mini-game,” the player who hit the target is awarded a large number of points for the round and the other players receive nothing. I felt like this happened more frequently than it should have, keeping the game from being well balanced. For this reason I am not sure this game would be very high on my list for Wii games to pull out in a party setting. It seems like the kind of game that is just begging for an argument to break out. My wife argued and screamed about how unfair the game was. I couldn’t understand why the ESRB rated this game for players 10+. There are no unsavory themes that I could find that a 7-year old couldn’t handle. Perhaps the frustration/unfairness issues were a factor? 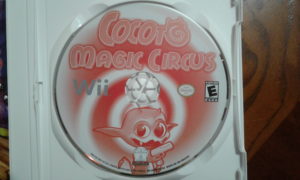 Cocoto Magic Circus is a fine game for practicing accuracy with the wiimotes on the Nintendo Wii, but out of all of the similar light-gun games I have played on the Wii, this one is actually my least favorite. It’s just more blah than fun. That combined with the fact that my opponent was yelling at the television the entire time we played made me want to put Cocoto Magic Circus back on the shelf for awhile.