When I was a little kid, around four to six years old, my grandparents would take me with their friends on big vacations to other states. One time we went to Pennsylvania, another time it was Vermont. We would tour the Liberty Bell or Ben and Jerry’s Ice Cream factory during the day and then at night they would try to put my sisters and I to bed and then break out their Rummikub set.

If I were quiet enough, they would let me sneak in and watch the game. One time I asked what a smiley-faced tile was (it was a joker) which got me instantly marched back to bed. I learned quickly to keep my mouth shut about what was in my grandpa’s hand.

My grandparents had a Rummikub set that looked like a padded briefcase. On the side of it was a fancy label that said Tournament Rummikub. The tiles felt fine and exotic though the boards to hold the tiles felt a little flimsy.

My grandpa is now deceased and my grandmother has dementia. The last game she remembers how to play is Rummikub, so we play it with her every chance we get. Years later, we still play with their old Tournament Rummikub set.

Several years ago I acquired a Rummikub set of my own. My son is around the same age I was when I learned how to play while watching my grandpa. My wife and I decided we would teach him how to play during our weekly family game night.

Rummikub is a tile-based game designed by Ephraim Hertzano. The set I currently have was published by Pressman in 1998. Rummikub may be played by two to four players.

One thing I discovered rather quickly is that the rules provided with my Pressman set are in many ways different from those from my grandparent’s set. I looked up Rummikub on Wikipedia and found that Hertzano authored a book entitled The Official Rummikub Book in which he provides three versions of the game: American, Sabra, and International. According to the article, the 1998 Pressman edition is the Sabra version.

To set up the game players dump all of the tiles face down in the center of the table and mix them all up. Then each player draws 14 tiles to make up their hand. The objective is to create sets of three or more tiles. A set should contain all of the same number with different colors, or be a run of numbers in sequence with the same color.

There are 106 tiles total. This includes tiles 1-13 of each color blue, black, red, and orange twice, along with two jokers. The same game can also be played with two decks of standard playing cards where two jokers are thrown out.

In order for a player to make their first play into the center of the table, they must be able to play a number of tiles that equals 30 or more points all at once. Jokers are wild tiles that may represent any other tile in the game. When played in the initial play their point value is the same as the point value of whatever tile they are replacing.

Most everything is fair game, though players will want to brush up on the rules to make sure a move they are making is legal. Also if you’re making a complicated move, make sure you know how to back out of it if you get stuck and it doesn’t work. Otherwise the other players will hate you. The 1998 Pressman rules have a good template that may be used to determine a move’s legality.

The most crucial rule to remember when playing on the center tiles is that to substitute and reuse a joker, the tile it is being substituted must come from the player’s own hand and not from somewhere else on the board. All tiles that have been played to the center must stay in the center. A player can’t substitute for a joker and then keep that joker in their hand for a later turn.

The Rummikub family rules I played with growing up required 50 points for the initial play and had some heavier restrictions regarding under what conditions a set with a joker could be altered. This 1998 Pressman Sabra version feels really easy by comparison. The next time I visit my grandmother I will look at the rules they had and see if I can compare the two.

Qwirkle is a tile-based game for two to four players. It was released in 2006 by publisher MindWare and was designed by Susan McKinley Ross. It is one of those wonderful games that is approachable to young children while simultaneously rich in complex strategy such that there is a great deal to enjoy for advanced players as well. I was introduced to Qwirkle by my five year old son who learned how to play it with his friends at a board game night we attended. He nearly taught me how to play all on his own, though the more advanced strategies seem to be difficult for him to implement and it will take him some practice to ramp up. It is also one of the rare games that doesn’t vary in gameplay based on the number of players playing. The game plays pretty much the same with two players as it does with four players, and no one will feel like a third wheel when playing it with three players.

The Qwirkle set I purchased at Target on sale for 15 dollars has high quality wooden tiles that fit nicely into the supplied cloth bag. Much like Scrabble, players draw their hand from the bag without looking to see what they will get. Each player’s hand is six tiles to start with. After each player plays, they draw the correct number of tiles to replenish their hand. 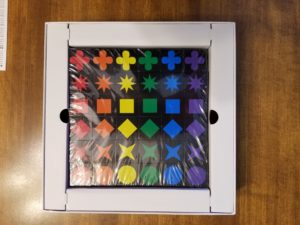 There are six different shapes: a square, an x, a diamond, a circle, a star, and a clover. The six different colors are red, blue, purple, green, yellow, and orange. There are 108 tiles in all which divided out means there are three of every shape and color combination that may be played in any game. Having this knowledge comes in handy in the later stage of the game when you are running out of moves for maximum points and want to know if a move can potentially allow an opponent to qwirkle.

In each turn a player plays a single line of tiles that are alike in one of two ways. They are either the same shape but different colors, or they are the same color with different shapes. After the first turn, these lines of tiles must be played on other lines of tiles in the play area. When a tile or line of tiles is added to the play area, points are given for each tile in each line affected by the play. A line of two tiles is worth two points, while a line of four tiles is worth four points. A line of six tiles is called a qwirkle and is worth 6 points for the number of tiles with a bonus of 6 points totaling 12 points. 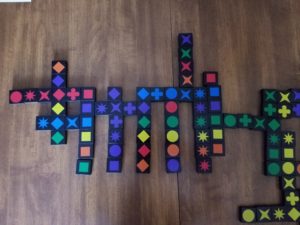 Linear Gameplay (Before We Knew What We Were Doing)

It is possible to play Qwirkle quite linearly, that is to make plays in straight, solitary lines for 2 to 12 points, hoping when you get your five pieces in a row that your opponent doesn’t have that sixth piece to qwirkle. However, scoring does not just occur on a single line unless only a single line is touched by the play. If a player plays beside an existing line, they are scored for the line they played as well as each line they added that intersects the played line. So, if a player plays a line of two tiles directly beside another line of two tiles, they receive two points for the line they created, plus two points for each of the new lines that were generated by the two lines sitting side by side for a total of six points. When playing in these successively larger squares, this can lead to significant point increases.

Outside of the linear style of play there are two main strategies. A player can play to block others from getting qwirkles. This keeps the opponents’ scores lower but can also impede the scoring potential of the one who played the blocking move. A player can also play to build out the play area so qwirkles are more easily accomplished for everyone.

The order in which tiles are played is extremely important and will affect how successive plays may be made on those tiles later in the game. I have found the best strategy for me is to only play moves where I can get more than five points in the turn. I do this by splitting out my hand. Wherever I have three or more tiles that could be used toward a qwirkle, I keep them saved so I can qwirkle in one move when the time is right. The remaining pieces I attempt to use to play around the board to maximize my points per turn and impede others from achieving their own qwirkles.

There is a legal move in which a player may choose to pass on their turn. The player may set aside all tiles from their hand they don’t want to be discarded. Then they may draw that number of tiles from the bag to replenish their hand. The tiles they discarded are then placed back into the bag and the bag is shuffled. Then that player’s turn ends and they are awarded no points. I have not been able to determine a situation in which this would overwhelmingly help a person, outside of perhaps within the first few turns of play. I have thus far not had a hand poor enough that I was willing to purge it at the expense of a turn’s worth of points.

When played with a worthy opponent, Qwirkle tends to be a very cutthroat game. The scores will often be so close that winning or losing comes down to some elegant play in the end game. The player who successfully plays through their entire hand of tiles once the tile bag is empty is awarded an additional six points to their final turn’s score and the game ends. Therefore there is great scoring power in being the last person to play.

I have had a surprising amount of fun playing Qwirkle. It is easy to teach newcomers how to play and it affords a challenge that keeps it fresh. I’ve been taking it to family gatherings. The younger children can still play with the adults, while the adults keep getting better and more difficult to beat. This is a fantastic game that I would recommend be in any board game or strategy game fanatic’s collection.