140 is a two-dimensional puzzle platformer with fat beats in which you play as a geometric shape. The game appears to be very minimalistic. The title screen boasts a flashy title with the title’s synthesized chiptune melody pounding in the background. When the player presses the enter key, the title screen melts into the stage selector where the player’s character is represented as a square in the middle of the screen.

A stage is selected by attracting colorful hovering circles and guiding them to these half-circle slots they fit into. There appear to be four stages to the game, unless there are other stages not represented by the first stage selection screen. Once a stage is completed, the player is brought back to the stage selection screen to fight a boss before they may move on to the next stage.

All of the moving platforms and obstacles in 140 move to the rhythm and beat of the chiptune soundtrack that plays throughout each level. The color schemes change as well based on the completion of puzzles throughout the levels which must be completed one at a time in order to progress. Falling into static or other deadly obstacles instantly kills a player’s character, but the player resurrects at the beginning of each save point liberally strewn throughout the stage, so the game is very forgiving. Thus far, I have found no permanent save game feature. Holding down the escape key exits the game.

In my first playthrough of 140 I made it through the first stage, beat the first boss, and completed a decent portion of the second stage. The stages are vivid and colorful, the music is topnotch and somewhat nostalgic. It makes me feel like I’m playing a modern Atari ST or Amiga game. The boss fight following the first stage played more like a Space Invaders style side-scrolling shooter, not at all what I had expected from playing thus far, but great fun none the less.

Perhaps when I beat 140 I will see the ending credits, but I decided to lookup more about the game on its Wikipedia page. 140 was developed independently by Jeppe Carlsen and released by Carlsen Games on Steam in 2013. Double Fine Productions has published versions of the game on consoles. At the time this article was published, 140 is currently included among the titles offered in a special Double Fine Productions Humble Bundle sale. For those who are subscribed to Humble Bundle Monthly, 140 is currently included in the Humble Bundle Trove.

Since 140’s graphics and sound are limited to geometric shapes and chiptunes respectively, this is a great title for children to play. Its initial difficulty is light allowing the player to learn the rules of the game while the difficulty does ramp up as the game progresses. There is no requirement to be literate to enjoy 140 as I have found no words or numbers to speak of outside of the title screen. The game is also DRM free and can be played across many of the devices I have.

I really like playing 140 and I’m looking forward to beating it. I have it loaded on my son’s laptop and I’m waiting for him to discover the shortcut for it on his laptop’s desktop to see what he thinks of it. Donating whatever you want to on the Double Fine Productions Humble Bundle sale for charity right now will unlock Mountain, 140, and Thoth. 140 alone is worth more than the minimum spent. 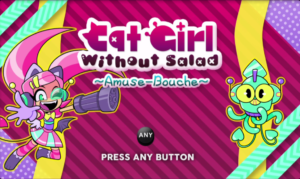 Revenge of the Mutant Camels meets Power Puff Girls in Cat Girl Without Salad developed by WayForward Technologies and released in 2016 as a Humble Bundle Original for the Windows 10 operating system platform. The game was originally an April Fools joke announced in 2013 billed as a game spanning all genres in one title. While my experiences with it thus far have revealed it to be primarily a horizontal side-scrolling shooter, Cat Girl Without Salad parodies familiar game elements from other video games integrated throughout its gameplay. 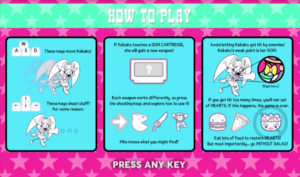 The protagonist hero of Cat Girl Without Salad is named Kebako. She is a robotic, ditsy cartoon girl bounty hunter with cat ears flying through space to fight enemies and take down bad guys. She is equipped with a default pea shooter that literally shoots peas. Throughout the game, the player will find what look like game cartridges that upgrade Kebako’s weapons in various ways. Each weapon upgrade is unique, creative, and sometimes annoying. 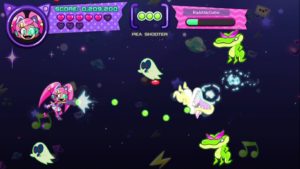 There is a platformer gun that shoots a cartoon platformer sprite who jumps on the enemies to kill them. The sports gun shoots golf balls at the enemies based on the direction of the player’s swing. A puzzle gun turns the side-scrolling shooter environment into a scrolling game of Bust-a-Move. An RPG gun opens up a fight menu similar to those encountered in Final Fantasy games where the player can choose to attack or use magic against approaching enemies. 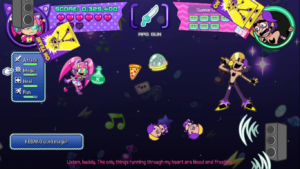 I also encountered a dance gun that mimicks the Dance Dance Revolution games made by Konami. Instructions for how to play Cat Girl Without Salad are simple and provided to the player at the beginning of a new game. Guns can be fired using any of the four direction arrow keys on the keyboard. When using the dance gun, if the player times their shots appropriately with the “dance” arrows scrolling across the screen, they can achieve a combo score for each time they time their shot correctly. 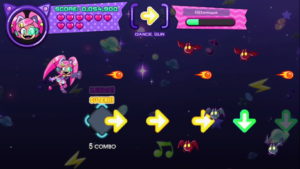 Ice cream sundaes, pizza, cheeseburgers, and any other junk foods may be collected to restore health, but not salads. Suffice it to say, Cat Girl Without Salad is a crazy game. The game characters seem to act like characters from animated television shows aired on Cartoon Network or Nickelodeon to preteen girls. This somehow seems to actually add to its charm. The blasts of bubblegum pink and strobing pastels excite rather than frustrate. Whereas many such cartoons tend to grate on my nerves, the audio in Cat Girl Without Salad is thus far enjoyable. The development team seems to have really known what they were doing and enjoyed doing it. 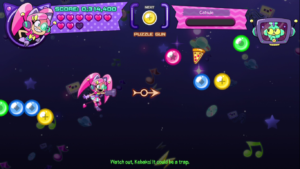 Am I playing Bust-a-Move or R-Type?

For appearing to be geared toward younger girls, whether in fact or as a joke, Cat Girl Without Salad is a legitimately challenging game. It is far from the hardest side-scrolling shooter I have played, but it’s certainly not easy either. The game feels fair, challenging, and the controls are solid. While the weapon types are clever and creative, they are not immediately useful without adequate practice. Expect to play even the first level over again to learn how to get it right.

As I said, Cat Girl Without Salad is a Humble Bundle Original. This means it was made as an exclusive title for those who subscribe to the Humble Bundle Monthly service. When subscribed, it may be downloaded DRM-free to the subscriber’s local machine and launched from a simple executable. If Humble Bundle were to ever no longer be a thing, I could imagine this game would become a rare but coveted title, perhaps like Chex Quest is now. 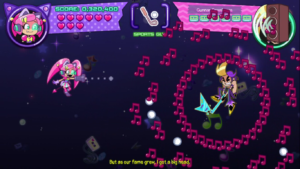 The more I play Cat Girl Without Salad, the more I really like it. It is an addictive side-scrolling shooter that takes the genre to places that are completely different from where its ever been while keeping the core elements familiar, but fresh. If you sign up for a Humble Bundle Monthly subscription, make sure you check out Cat Girl Without Salad. 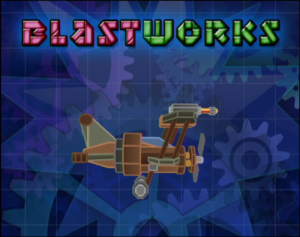 Blast Works is a side-scrolling shooter game released in 2008 for the Nintendo Wii. It was developed by Budcat Creations and published by Majesco Entertainment. From the little research I have done on this game, it appears to be a port of Tumiki Fighters from the PC to the Wii.

Tumiki Fighters was developed by Kenta Cho and released as free software in 2004. Written in the D programming language, it uses OpenGL for graphics rendering. I would assume Kenta Cho had a good deal of creative license with Blast Works given that versions of his other games, rRootage, Gunroar, and Torus Trooper are included as unlockable bonus items in the game. 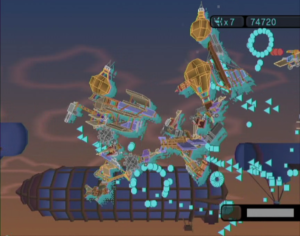 Blast Works has a unique game mechanic that I don’t believe I’ve seen in any other side-scrolling shooter I have played. When an enemy is shot down and is falling toward the bottom of the screen, the player may swoop in to catch the enemy or the enemy’s guns. Wherever the enemy makes contact with the player’s plane is where the two objects connect. Once connected, the enemy’s guns will fire from that position as the player’s own guns toward other enemies. The former enemy will also serve as a buffer from being hit directly and losing a plane. As a level progresses, downed enemies hook to downed enemies creating a massive structure of firepower the player has accumulated to take on the level’s final boss. 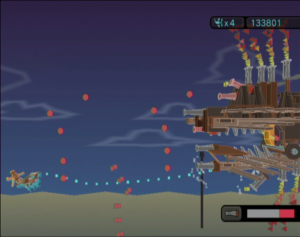 There’s nothing quite like a good boss bullet hell.

When I first witnessed this game mechanic it surprised me. I had a great deal of fun connecting out enemy planes to the end of the screen and blasting anything in my path with my own bullet hell for once. I then got to thinking that due to this game mechanic the game might turn out to be too easy. Not so. The game makers did an excellent job balancing the game. Each boss I played outside of the first couple levels made me sweat. The player may choose three different levels of difficulty. The bullet hells are intense and Blast Works provides a similar experience to other classic side-scrolling shooters I have played in the past. 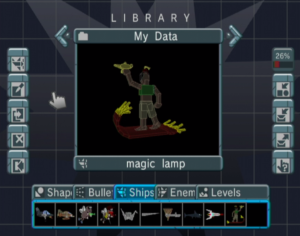 Come with me little girl on a magic carpet ride.

Another interesting feature provided in Blast Works is a full-fledged level editor. The player may create their own level, with their own enemies, and custom build their own planes to fly through those levels. Even new bullets can be created and customized. The game offers a CAD-like program to create and save new shapes and modify environments. The amount of detail to which a player can create their own levels is incredible. Blast Works feels like a PC game that still works incredibly well with the standard Wiimote/Nunchuck controllers.

Blast Works features three modes of gameplay for playing through the side-scrolling shooter levels. Campaign Mode allows one or two players to play through campaign levels in a sequential order. I assume extra game features are unlocked through this mode of play, but I have yet to unlock anything yet. Arcade Mode allows one to four players to play through levels sequentially for points. And as mentioned earlier, one to four players may play through a custom level created by a player in the User Levels mode. 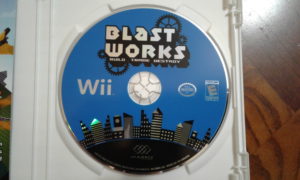 The music in the Blast Works is good. It sounds like a typical Wii game soundtrack, but mixed with the heavy synthetic techno kind of themes I would expect from a classic side-scrolling shooter of the Super Nintendo era. While the graphics are a bit blocky and look quite dated for the time this title was released, Blast Works more than makes up for it in gameplay and replayability. I picked up my copy of Blast Works used for less than four dollars. From a quick Amazon search it appears buying a new copy might cost less than ten dollars. At that price it’s well worth it. I would especially recommend this title for children who enjoy playing with Legos. It’s certainly not Minecraft, but who knows? Maybe this will be a gateway game for getting my son to play with CAD software someday in the future.