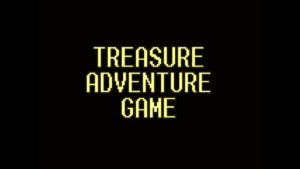 The GOG.com version of this game worked flawlessly when I played it in Windows 10.

Treasure Adventure Game is an action adventure platformer released in 2011 for Windows PCs. It was developed by Stephen Orlando and published by Robit Studios. The music was composed by Robert Ellis.

An evil demon attempts to wipe out all magic from the world. A young apprentice called Huayin, who was training to become a wizard, gathered 12 enchanted items with which he used to face the demon. Though Huayin was ultimately successful in defeating evil, the battle between himself and the demon caused all the land of the world to break up into small islands scattered about the world.

Centuries later, an archaeologist by the name of Baggus, along with his friend Gagwin and his son, go on a quest to find all 12 lost enchanted items from the epic battle fought between Huayin and the demon with the intention of opening a museum to house the lost artifacts. Upon finding all of them, Baggus opts for them to retire with their treasures while Gagwin convinces Baggus to press on in order to find the temple that can only be accessed by the one who has possession of the 12 artifacts. Gameplay begins on the island supposed to have the location of the missing temple. The player takes control of Gagwin’s son. They enter a cave and then the player’s character wakes up to his grandmother in her home. 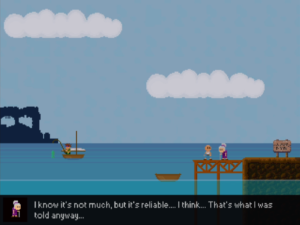 Grandma gave me a boat.

The player’s grandmother presents him with a boat and encourages him to seek his fortune as an adventurer. Traveling to the east, the player very quickly meets up with Baggus in his shiny new museum that is soon to be opened. Baggus vaguely recognizes the character but doesn’t give it much thought. He tasks the player with finding the three essential items all treasure hunters must have, a hat, a compass, and a sail. Once the player finds these items, he may return to Baggus for additional training.

Treasure Adventure Game plays a lot like Zelda II: The Adventure of Link. The game is quite clever and to its strength doesn’t take itself too seriously. That being said, I have seen this action adventure platformer formula in many sorts of games released for the PC spanning decades. There is nothing revolutionary here and not much new. If you enjoy this tried and true game formula however, you will have fun with Treasure Adventure Game. 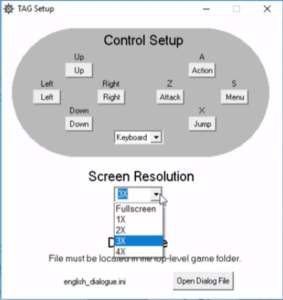 Treasure Adventure Game serves up an extra bit of nostalgia in one way I never expected nor wished for. In order to change the game controls there is a companion Setup.exe file installed along with the game, like many of the DOS games from the late 80s and early 90s, instead of being an option in the game’s main menu for some unknown reason. This is also the tool that must be used to change the size the game graphics take up on the screen. When in game and you are told to press any key to continue, the game actually means it will only respond to any key currently configured on the virtual gamepad. Pressing any other key does nothing but increase the frustration of the player. Though I have been stubbornly playing Treasure Adventure Game using the keyboard, I would imagine it’s far more fun to play with a gamepad given its action platforming style. 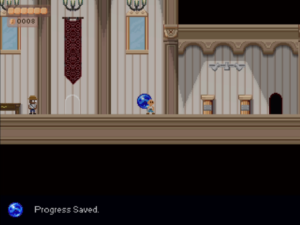 Always save your progress. Save early, save often.

Treasure Adventure Game plays like a PC game that really wants to be a console game. There are extremely verbose scrolling text dialogs to convey the story everywhere throughout even where it doesn’t make sense to have them, much like what you would expect from a 16-bit title. The player may have at most three save files, which is pretty standard for many console titles. Perhaps most frustratingly, Treasure Adventure Game also implements save points. These save points are shiny blue orbs you will encounter in various places throughout the game. When they are used, the player’s progress is saved and health is restored. You will want to keep your eyes peeled for these and make use of them each and every time you see one. While playing, I would ignore one eager to move on to the next area only to be faced with creatures in the new area I could not quite handle. When you die you go back to the last save point and lose all of the progress made since the last save. To my knowledge there is no autosaving mechanic anywhere in Treasure Adventure Game. 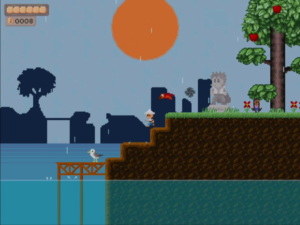 Running with my parrot friend.

In the beginning of the game, it is important to look out for the jumping fish in the waters between islands. They will tax you one point of health any time they jump out of the water and touch you. This isn’t so bad when you are at full health, but when you’re trying to get back to another island to save and heal, it’s bad news. My strategy has been to move directly toward the fish until they jump, then pull back just enough where the arc of their jump falls short of my boat, then push forward quickly before they have a chance to jump again. 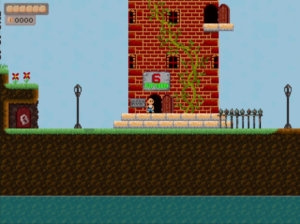 Outside the local 6-Fifteen. I’m assuming this is a play on 7-Eleven.

Treasure Adventure Game doesn’t seem all that original, but my brief encounter with it thus far as been enjoyable. While it’s not at the top of my gameplay list, I do want to continue further in it and keep playing. At the time of this article’s publication, Treasure Adventure Game was being offered for free on GOG.com in celebration of the release of its sequel, Treasure Adventure World. I would recommend picking up a copy; this is a cute game worth playing. 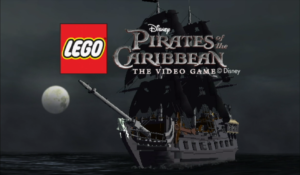 Lego Pirates of the Caribbean: The Video Game Title Screen

To make up for her having to play through Cocoto Magic Circus last night, tonight my wife and I pulled out Lego Pirates of the Caribbean: The Video Game for Nintendo Wii. It was released in 2011. It was developed by Traveler’s Tales and published by Disney Interactive Studios.

Lego Pirates of the Caribbean: The Video Game follows the formula of most Lego games. The game seems to attempt to recreate the film it is based on scene by scene in a sort of parody: switching things up where necessary for younger audiences, to make the Lego blocks work with what is happening on screen, or just to make things more comedic for the audience. It really feels like you are replaying the movie in Lego blocks. The first four movies are represented, so it looks like there is no shortage of adventure awaiting us as we complete this game. 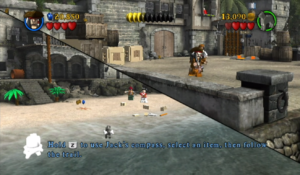 The split screen mechanics work well. Someone was playing as the dog in the lower left.

What made Lego Pirates of the Caribbean: The Video Game a good title for us to play is that it is fully two-player cooperative. A second player can drop in and out of the game at any time by pressing the “+” button on their wiimote. Players can change which character they wish to play within the current scene by pressing the “c” button on the nunchuck. This is a fantastic game for two players to spend several hours having fun enjoying a single game together. 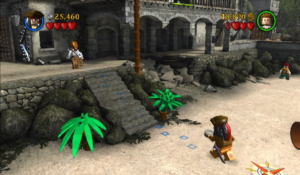 Lego Pirates of the Caribbean: The Video Game will let you be a team player or a jerk backstabber. Friendly fire is turned on by default, so hitting your fellow player will cause them to take damage. I haven’t checked if there is an option to turn off friendly fire, I need to look into that. True to her competitive form, my wife would hit me to knock me away from getting “her” treasure. The treasure totals collected will show up separately during the level, but they get combined at the end of the level. This game is truly a cooperative gaming experience, so there’s no need to be mean. 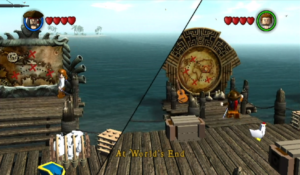 Choose between Pirates of the Caribbean movies to play through in port.

Sometimes I’ll get into an area in Lego Pirates of the Caribbean: The Video Game where I am scratching my head, unsure what to do next to progress in the level. I have therefore constructed a formula for progression that has served me quite well when working through a new area in this game’s levels.

1. Kill all enemies in the area. Make sure all damage that can be levied toward you is neutralized.

3. Run around and look for items that show either a “c” button above them or a picture of another character that is required for you to play as in order to use that item. There were several things we had to do that required controlling a dog, or that could only be done by a specific character like Captain Jack Sparrow.

4. Use Captain Jack Sparrow’s compass to find anything that might be necessary in the area, dig for it, and use it. 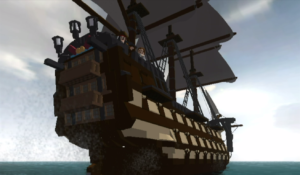 We are commandeering this vessel. It’s the nautical term.

So far, the gameplay in Lego Pirates of the Caribbean: The Video Game has been very linear, but the game does not always hold the players hand and tell them exactly what they should do next. I think the game creators struck a refreshingly good balance between creating a challenging, fun experience and guiding players appropriately in how to play their game. After beating the first level, access to the beginning levels in all four Pirates of the Caribbean movies are unlocked, and the player can travel from the port to the current available level in any of those movies. 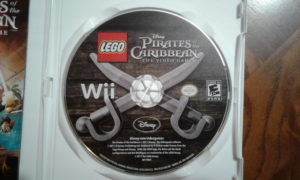 Lego Pirates of the Caribbean: The Video Game Game Disc

Quite the contrast to last night’s game, my wife wants us to complete and stream our progress in Lego Pirates of the Caribbean: The Video Game. I have had quite a bit of fun with it myself thus far. Obviously this would be a good title for children; the ESRB recommends this title for ages 10 and above. But I would also say this is a fun title for adults that want to play a nice relaxing game at the end of a day where they would like to enjoy only a moderate, light mental challenge while they laugh, have fun, and are entertained.