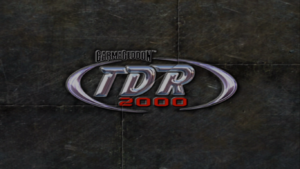 Carmageddon TDR 2000 is the third game in the Carmageddon series released in 2000. It was developed by Torus Games and originally published by Xicat Interactive for the Microsoft Windows 98 and 2000 operating systems on PC. The TDR in the title stands for “Total Destruction Racing,” for those who were wondering.

When I was a kid, I’d be sitting in the back seat when my parents took me along to the grocery store in the family car. More often than not when driving through the parking lot, a pedestrian would walk right out in front of my dad’s car without ever looking up to see if any vehicles were coming. Whenever this happened, my dad liked to jokingly say, “There’s fifty points!” as they crossed in front of his car’s grill. This is the kind of sense of humor the Carmageddon series is geared to. 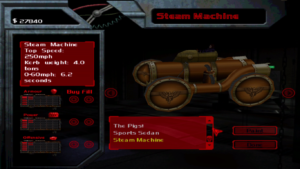 If you are unfamiliar with the Carmageddon series, the original game’s tag line is The Racing Game for the Chemically Imbalanced with a pedestrian carrying a briefcase being run over by a fast-moving red sports car. Like most racing games, the player races against other contestants around a track for a certain number of laps, reaching check points along the way. If the player is able to reach the next check point in time, they are awarded more time as they make their way to the finish line. Where the Carmageddon series differs is that the player is awarded bonus points for each pedestrian they are able to run over. 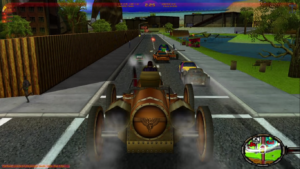 These guys are about to get steamrolled.

In Carmageddon TDR 2000, railroading pedestrians rewards the player with satisfying crunch and squish sounds encouraging the player to produce more carnage. Performing fancy tricks also awards points to the player. These bonus points can be spent purchasing new vehicles or upgrading an existing vehicle’s engine power, armor, or weapons. Unlike real-life, many of the pedestrians really seem to have a death wish. In many cases the race track is clearly marked with innocent bystanders carelessly walking right into harms way, even when they are walking around the remains of their already previously unlucky comrades. 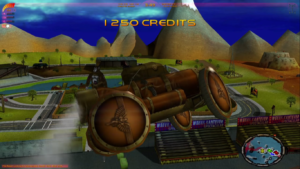 I didn’t know this doubled as a airplane. Vroom!

I forgot how much I have missed playing with Hot Wheels or Matchbox cars as a kid and pretending I was in the cars doing the incredible tricks and causing massive crashes. I had fun doing all of this in Carmageddon TDR 2000. The tracks I have played so far have not been linear like in other racing titles to the point of being rather impressive. The game seems much more open-world than most games ever got in the year 2000. There is plenty of room to drive around and explore provided the player doesn’t run out of time. I just figured out where the checkpoints were and made sure I drove through them in sequence whenever I needed to add time to the clock. The rest of the time I was trying to drive up and over anything I could, enjoying the full extent of fun the sandbox I found myself in could provide. The first track provides a loop the loop to speed through and a ramp to jump over a series of RVs and trailers. 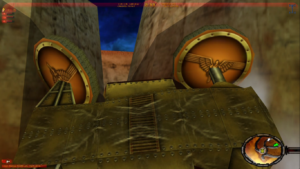 There are a number of interesting cars available to choose from even at the beginning of the game before any of the later cars are unlocked. I noticed one called the Steam Machine. Given that I am an avid PC gamer, I had to drive it. It was massive fun steamrolling everything in my path. With great freedom of movement comes great responsibility though. I found it trivial in many cases to pin myself in a place where I could not maneuver free. When aborting a race, a player keeps the points they accumulated up to the point they aborted, so it’s not much of a loss to start the race over when stuck. If you run the race straight along the track, you shouldn’t have this problem, but if you’re like me and enjoy pushing the limits of the game, it will likely become a fairly frequent occurrence. 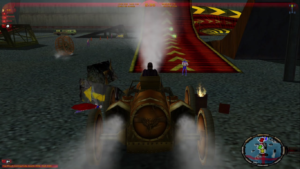 Is that a car that’s just a moving wooden wheel? I want to wreck it!

The multiplayer functionality in Carmageddon TDR 2000 requires DirectPlay to work. When I attempted to install DirectPlay in Windows 10, the process locked up and wouldn’t let me proceed. A quick check of the Steam forums indicates there are people who were able to get it to work, but their solutions may not work in all cases. Microsoft’s official current stance from what I can tell is that DirectPlay is deprecated and therefore completely unsupported for Windows 10. 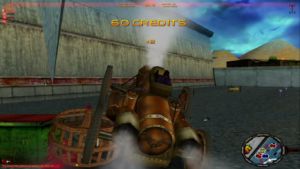 Carmageddon TDR 2000 is available for download on both Steam and GOG.com for a fair price on each. This game is raw arcade vehicular mayhem and racing, and devoid of any meaningful plot or story-line. The Grand Theft Auto series probably fills this niche for gamers better these days, but I had a great amount of fun launching my steam machine around for the small time I have played. I do plan to revisit this one and see where the rest of the game takes me.