The Game of Life Adventures is a card game based off of the Game of Life board game of similar name first released by Milton Bradley in 1960. This card game was released by Hasbro in 2014. To setup the game, the players separate out and shuffle the four types of game cards into four distinct decks. The types of cards are family, career, adventure, and wealth. Family cards relate to getting married, having children, etc. Career cards relate to education, careers, and getting paid. Adventure cards are ways the player could make their life more interesting. Wealth cards provide various tangible assets required to fully take advantage of career and adventure cards. 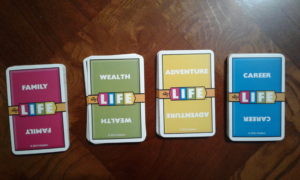 The Game of Life Adventures is designed for two to four players. Once the cards are divided into their four distinct color cards, players take turns drawing one card at a time from whichever pile they desire until all players have five cards in their hand. Within the decks there are cards that have a +10 printed on them. These cards indicate that 10 years have passed. If a player draws one of these cards during an initial draw phase, they are placed to the side and the player then redraws. The +10 cards are then reshuffled back into their respective decks.

After all players have their five card hand, play begins with whomever was selected to go first. Within a turn, a player will play a card, tell a story about how that card relates to their fictional life they are creating there within the game, and then draw a new card from any color pile they choose. Some cards have prerequisites that must be satisfied before they may be played. For instance, it is impossible to celebrate a wedding anniversary if you have not yet gotten married. 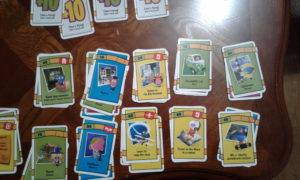 This is my life.

Every time someone draws a +10 card, ten years have passed within the game. After sixty years, the game ends. I spent my first ten years working on two degrees while my opponent built an igloo and got herself a pet polar bear and a pet shark. I was stunned at how quickly time had flown, so I raced to catch up doing everything interesting I could while I was young. I began a career as a politician and got paid handsomely. This allowed me to plan an extravagant wedding where my spouse and I exchanged vows while sky diving, and we moved into a beach front property where we had our two twin boys.

Meanwhile my opponent became a rock star sensation, rising in the music charts. While I didn’t think much of her music, my campaign staff apparently thought it would help as background music on the campaign trail. Since she apparently didn’t give them permission to use her songs, she sued (by playing a card) and took my house. Given that I am an expert politician, I passed legislation that allowed me to do what I wanted to do and countersued, taking my house back. From that day on, we were rivals. 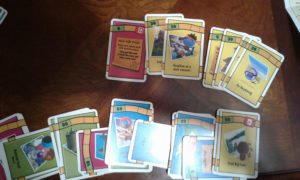 This is my opponent’s life.

Twenty years had passed. I wanted to do everything interesting I could. I wanted to make a mark and be somebody. I purchased a car, a boat, and a plane. I circumnavigated the globe. I learned to do a loop-the-loop in my plane. I even took a rocket ship to the moon. But what I hope I will most be remembered for is skydiving from my hot air balloon with a skateboard in my hand so I could skateboard land into a skateboarding contest for charity, which I won by the way.

The years went by. My opponent had three girls, while I had three boys. I suppose we both decided it was time to give back to society. She completed her Ph.D. and became a rocket scientist. After robbing the taxpayer blind I began a rewarding career in teaching that I held until the end of the game.

The game ends when six +10 cards have been played.

Once the sixth +10 card has been played, the game ends. Each life event card played has a number on it showing how many points it is worth. The player with the most points wins. I felt I had lived the most rewarding life of all with 1055 points. My opponent got 1050 points, so maybe she wasn’t so boring after all.

The Game of Life Adventures card game is a great party game that you can teach newcomers very quickly and have a lot of fun telling stories about your fictional characters. There is more chance than skill involved in this game, so it might be a good title to pull up when you want to play something with someone who is not very confident in their gaming abilities or when you are playing with children who like to talk more about their fanciful in game character than any gaming strategy. Even though there is a scoring system, there is not much about this game that takes itself seriously. It’s a light-hearted bit of fun to have, much like its board game counterpart.