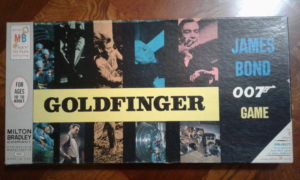 As alluded in the title, Goldfinger James Bond 007 Game is a board game released by Milton Bradley in 1966 after the release of the hit movie starring Sean Connery playing as James Bond. The Goldfinger board game centers around the scene in the movie in the vault room of Fort Knox as depicted on the game’s board. This is a two player game. One player controls the red pieces while another the blue pieces and one yellow piece which depicts Goldfinger. There are 8 blue pieces. The blue player’s objective is to get the Goldfinger piece to the outer edge of the board. If the blue player is able to accomplish this, they win. There are 16 red pieces. The red player wins when they are able to successfully capture the Goldfinger piece. 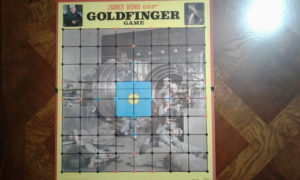 Game board with initial starting locations colored in.

Capturing is accomplished by directly surrounding a piece on both sides. The blue player would capture a red piece by having two blue pieces on either side of it, and vice versa. If the red player were to move a piece between two blue pieces, their piece remains safe and is not passively captured. A player may capture two pieces in one turn, if they happen to move a piece into place such that it completes the corner of a right angle. When capturing, the Goldfinger piece may act as a blue piece. Neither red nor blue pieces are allowed to occupy or move through the Goldfinger piece’s starting location. 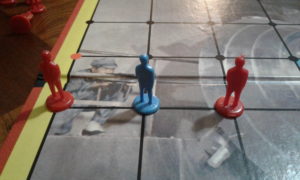 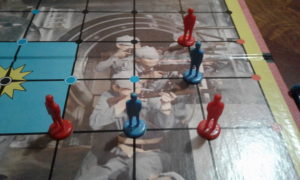 Capturing two pieces at once.

Red always goes first. Each turn a player must move one piece in any horizontal or vertical direction any number of spaces. They may not turn a corner or move in two directions in their move. Play alternates until the Goldfinger piece escapes to the edge of the board or the red player captures the Goldfinger piece. 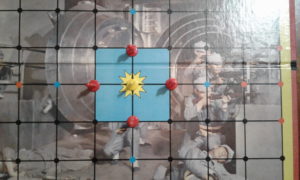 Goldfinger James Bond 007 is a very mentally stimulating, challenging strategy board game title. Much like chess, it really takes a great deal of skill and thought to master. The first few times I played through this game, I made some of the clumsiest mistakes that my opponent was quick to take advantage of. It’s nice to play with someone who has never played before on your first time, because she made just as many mistakes that I was then able to take advantage of as well. 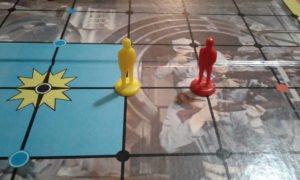 It’s strange and interesting to switch colors and play the other side from game to game. The set of strategies is completely separate between blue and red players, and I found myself really having to think through every move. The rules make a point of stating that this game is meant to be played like chess. That means, while the blue team could win by taking direct advantage of a mistake made by the red player and move the Goldfinger piece to the outer edge of the board, the blue player is supposed to alert the red player as such a move is made. The idea is that a sort of check and checkmate should be called as the game is approaching completion in order to ensure the game is played strategically, not accidentally. 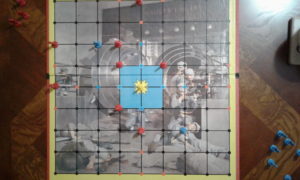 It surprised my opponent and I both how quickly the tide of the game can turn. It is easy to get cocky when you have clearly captured more of your opponents pieces than they have captured of yours, yet still get routed. This game is not quite like any other two-dimensional strategy board game I have played. It is sort of like Chess, Checkers, and Nine Men’s Morris, but none of these games really do justice to explaining the gameplay going on here.

I found my copy of Goldfinger James Bond 007 at a local antique store a few blocks from my house in the city I live in. They sold it to me for $15. The cheapest copy I saw online was on Ebay for $40, which is a little steep. From my limited research it appears this game may be rare, but it would really be trivial to duplicate on a checker board without the movie theming. In order to do this you would need two sets of checkers pieces for one of the colors. So if the red player were still red when using checkers pieces, they would need two sets of red checkers or 16 red checkers. Meanwhile, the black player which is taking the place of blue would place 8 black checkers in their places on the board and two black checkers stacked on top of each other in the center to designate the Goldfinger piece. Instead of playing on the squares, play would be done on the intersections of lines and the board would have to be laid out as shown in the pictures in this article. 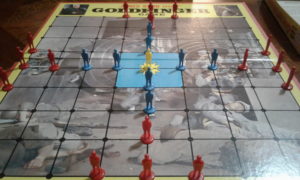 Initial piece positions. Note how this could be imitated on a standard checker board.

Goldfinger James Bond 007 is a great game for the collector. It’s a nice piece of American cultural history, it’s a Milton Bradley game from the 1960s, and it’s somewhat rare – all things that make the game a nice conversation piece. But beneath all this theming and history is a well balanced, impressive strategy game that can be played using very basic gaming components. I would hate for any fellow gamer to have to miss out on the richness of this impressively amazing strategy gameplay simply because they haven’t been able to get their hands on this particular movie to board game title.