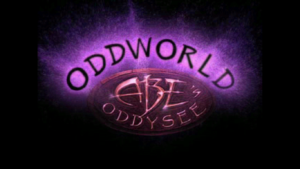 Oddworld: Abe’s Oddysee is a cinematic platformer developed by Oddworld Inhabitants and Digital Dialect and published by GT Interactive for the PC in 1997. This is one of the games I got excited about and played nearly right when it first came out. I put a lot of time in on this game back in my middle school days, and it’s been a treat to play it again after so long. 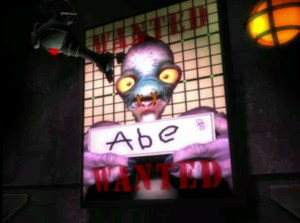 Abe’s wanted for his meat. Help him escape.

A friend of mine informed me that GOG.com is currently handing out free copies of the original Oddworld: Abe’s Oddysee to promote the newer remake Oddworld: New ‘n’ Tasty! that came out in 2014. At the time this article was published, there were several more hours left on the GOG.com promotion, so go to their site to see if you can pick up a free copy for yourself. If you have the original disc, it does work natively in Windows 10, but the GOG copy is DRM free and will run without the original CD-ROM. 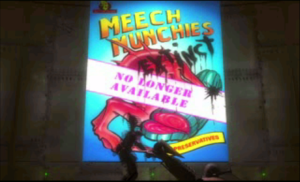 “We used to make Meech Munchies, till the Meeches were through.”

Having run both versions, I found it interesting that the cutscenes in Oddworld: Abe’s Oddysee are manufactured to run off of a slower CD-ROM drive and as a result a lower frame rate. I thought I would get a significant boost in cutscene frame rates by running the GOG version, but it appears the development team realizing the limitations of running cinematic high-resolution video off of a 4x CD-ROM drive opted instead to simply display a dark slide show with fade-out effects and sound superimposed. The result is a cutscene of superb graphics and sound quality for the time that you can’t understand why your computer can’t handle to make it less choppy 20 years later. 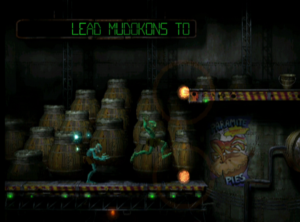 Chanting a Mudokon to freedom.

In the game’s first cutscene the player meets Abe, the lovable Mudokon protagonist, who narrates the story and around whom the story is based. While working late one night at Rupture Farms, a meat processing facility, he pokes his head into a corporate board meeting to satisfy his curiosity. The player learns from Abe’s narration that Rupture Farms had been harvesting the ingredients of their products to extinction and are running low on sources of revenue. Their solution to get profits back up was to make Abe and his fellow Mudokons into a new snack on their product line. When Abe hears the news, he is understandably frightened and works to make his escape. 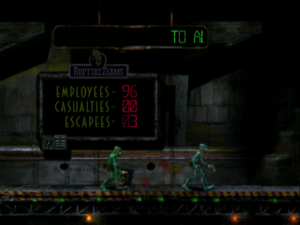 Scoreboards are spaced throughout the game to show you how you’re doing.

The objective of Oddworld: Abe’s Oddysee then is to help Abe and as many of his fellow Mudokons escape Rupture Farms. The first level provides a tutorial for the player to help them learn how the game is played. Following the tutorial’s instructions to the letter will not give the player a perfect score in the beginning level, however. The player is scored positively by how many Mudokons Abe is able to free from Rupture Farms. The player is scored negatively for each Mudokon Abe kills throughout the game. This final score will determine Abe’s fate at the end of the game. Abe has the ability to chant to possess Sligs, the guards that keep the Mudokons captive, and to open portals to send fellow Mudokons home to safety. The tutorial goes over all of these mechanics, but if you want to play a perfect game, it is best to study the controls prior to beginning the game. 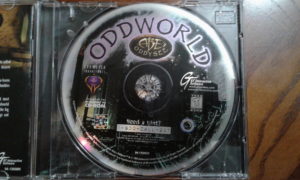 While Oddworld: Abe’s Oddysee is a cinematic platformer, more emphasis is placed on puzzle solving than jumping and action. Many situations will call for quick action, but each time the player screws up resulting in death, they are respawned back to the safest location at the beginning of the immediate puzzle area. The game is very much like the classics Flashback: The Quest for Identity or Another World both by Delphine Software. The graphics and sound are impressive for the time it was released, and while the game can be quite challenging and frustrating, there is a intense satisfaction from figuring out how to solve the immediate puzzle and moving on to the next screen. The game can be saved on any screen, so once you have gotten past a difficult spot, save early and save often. Oddworld: Abe’s Oddysee is one of the gems of the late 90s. If you’re reading this on the day I published this article, head over to GOG and pick up a free copy of this game for yourself.