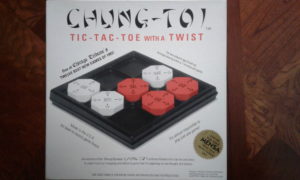 All serious strategy board gamers have been there. You’re on a camping trip out in the middle of nowhere wilderness where there’s plenty of food and plenty of fire to roast weenies and marshmallows, but no electronics and few games to play. Maybe someone brought a deck of cards, but no one can agree to learn anyone else’s card game, they just want everyone to play their own. Often someone brings Uno, which is nice but not too mentally engaging. Perhaps someone who didn’t mind being labeled as the camp nerd took one for the team and brought along chess. He’ll kick your butt every time, but at least it gives you something to do. But most often, in the backwoods campgrounds I have been to, or even on the way there or back while waiting for a table at a Cracker Barrel country store, somewhere there is a checkers board. It may be scrawled out on the top of a wooden barrel, or painted onto a picnic table. All it takes is 12 round pieces each of two distinct colors and you’re saved from boredom. Even if your opponent doesn’t know how to play checkers, it’s likely one of the easiest games to teach.

So you begin playing checkers. At first the game is quite even, piece captured for piece captured with the occasional one piece for two pieces. But eventually the end game comes along, and it’s down to a number of kings duking it out. It feels like I have had more opponents quit on me at the beginning of the late game than not when playing checkers.

“Ah, I can see you’re just too good for me! You win!” they say as if they are doing me a favor.

Sometimes I have thought to myself, “Self, wouldn’t it be great if you could just skip to and play the checkers late game with someone so they don’t get fatigued and chicken out?” That’s kind of what Chung-Toi feels like to play. Chung-Toi, a product of House-of-Chung Enterprises, bills itself as “Tic-Tac-Toe with a Twist.” Copyrighted in 1985 and designed for two players only, the objective of this game is to get three of your pieces in a row. The game contains a 3-by-3 board with three white pieces and three red pieces. 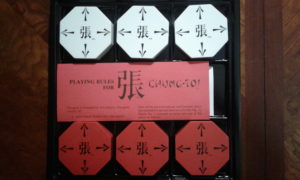 The rules are pretty simple. Both players decide who goes first. Taking turns, each player places a piece on the board until all pieces have been placed. Each piece is in the shape of an octagon and has arrows on four sides. When turned one direction, a piece’s arrows will be pointed horizontally and vertically on the game board. When turned one-eighth of a turn from that position, the arrows are pointed diagonally across the game board. These arrows indicate the direction that piece is allowed to move in a later turn, so when you place your pieces make sure you’re happy with the direction you’ve got the arrows pointing.

Once all pieces are placed, if no player already has three pieces in a row, a player may move one of her pieces in the following ways. A piece may be moved in one direction indicated by the current position of the arrows across the board either to an adjacent empty position or to hop over a piece to an empty position two spaces away from the piece’s current position. When moving any piece, the player may reorient the piece’s arrows in any configuration they choose. A piece may also be rotated to change its arrow configuration from diagonal to horizontal/vertical and vice-versa. Finally, a player may rotate a piece such that its current arrow configuration does not change, in essence passing on her turn. 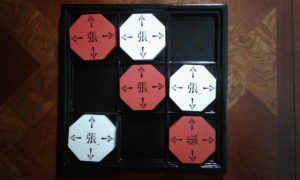 Playing this game starts out feeling like a simple game of tic-tac-toe, but once all pieces are on the board, it is a puzzle to figure out how to arrange your own pieces while not compromising the positions you are holding that are keeping your opponent from winning. This game won a Mensa award in 1994. It’s really easy to pickup and teach. It’s moderately simple to get decent at this game when playing with other beginners, but becomes a delightful challenge to learn how to master besting an opponent when similarly matched.

I was unable to find a website or any real information on House-of-Chung Enterprises. According to the game box, W. Reginald Chung from Tifton, Georgia holds the copyright on Chung-Toi. It’s such a simple game, you could actually scrawl out a playing field using chalk on pavement and then use make-shift objects to designate player’s pieces and directions if you were out at camp and had no games with you.

I found a copy on Ebay selling for under 10 dollars. This seems like a worthwhile price to me. The biggest issue with paying too much for this game is that it literally feels like the end game to another game. The box claims that the “average playing time is 7 minutes per game.” I have yet to play a game of Chung-Toi that came close to 7 minutes, which would make me wonder if I was really getting my money’s worth. On the whole though, this is an excellent game to play with someone who has a short attention span, when you have only a little bit of time to waste, or you’re out in the woods with nothing to do.