This past Friday night, some of my co-workers and I had our first board game night at a local tavern that we are hoping to turn into a semi weekly event. This week we played the card game BANG! by Emiliano Sciarra and published by daVinci Editrice S.r.l. BANG! is a game for 4-7 players. Each player is assigned at random a vocation: Sheriff, Deputy, Outlaw, or Renegade. Each player is also assigned at random a character role.

The typical action of play is to shoot other players with BANG! cards in order to deplete their hit points. When a BANG! card is played against a player, the opposing player may play a Missed! card which keeps them from taking any damage. In most cases, a player may only play one BANG! card per turn. Another very common card is the Beer card. This card restores one hit point to the player who uses it.

Each player starts out with a Colt .45 pistol which has a range of 1. The range is how many seats away from a player you are. Therefore, with a gun having a range of 1, I could hit a player on my right or my left, but not a player two seats down from me. In order to hit a player two seats down, I would need a weapon with a range of 2. If the player beside me were to lose all their hit points and die, then the player next to them would then have a range 1 from me, and no longer a range 2.

To my left, going clockwise around the table, I found myself sharing the old wild west with quite the band of notorious characters. Slab the Killer had four hit points. Whenever Slab played a BANG! card, the opposing player had to play two missed cards in order to keep from being hit. Next to Slab was Kit Carlson. Kit also started with four hit points, but at the start of each turn was able to draw three cards, choose two, and then place the third back on top of the draw pile face down.

Then came our Sheriff, Paul Regret. Paul only had three hit points, but because of his status as Sheriff, he got to have one extra hit point to bring his total to four hit points. Paul also had an automatic Mustang in play. The Mustang is a card that requires other players to have an additional +1 range in order to hit you with a gun. This automatic Mustang would not keep Paul from playing an actual Mustang and adding +2 to the range others would need to hit him.

Then came Willy the Kid with four hit points. Willy had the ability to play any number of BANG! cards in one turn. Next to Willy was Lucky Duke. Lucky had four hit points. Whenever Lucky was forced to DRAW! to determine how a random event would play out, he was able to draw two cards from the top of the pile, choose the one that worked best in his favor, then discard both cards. Next to me was Suzy Lafeyette. Suzy had four hit points. She could also draw a card if there were no more cards in her hand. In the wild west, my name was Calamity Janet. I could play BANG! cards as Missed! cards and vice versa. My vocation was Deputy, and it was my duty to protect the Sheriff from all Outlaws and Renegades. 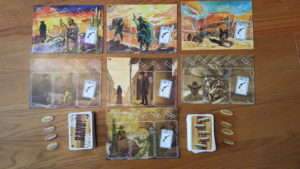 Play began with the Sheriff. Immediately after drawing two cards on his first turn, Mr. Paul Regret played a Mustang increasing the range to hit him to +2. The other citizens, not to be out gunned, quickly replaced their meager pistols with high range rifles. Lucky Duke on his turn even equipped a scope (adds +1 to existing range) in order to have complete range over the gun fight. Lucky fired the first shot, wounding and taking one hit point of life from Suzy Lafeyette.

Slab the Killer, living up to his name, came out shooting. First, he fired at your’s truly. Fortunately I had a handful of Missed! and BANG! cards. I played two in order to dodge his bullet. Not yet satisfied, he played a Gatling Gun, sending a series of bullets out toward every player. While I dodged the fire, others weren’t so lucky. Many were wounded.

Looking on at the carnage, the Sheriff sought to systematically pick off the most violent offenders within range. Willy the Kid, living up to his reputation of being a good shot, unleashed a rain of bullets down on Lucky Duke for his treatment of Suzy Lafeyette. When possible, everyone who was wounded was drinking beers to restore their hit points.

On my next turn, I drew a Saloon card. The Saloon card increases everyone’s hit points around the table by one provided they are not already at full health. With everyone shooting at everyone else, I really didn’t know who was to blame. As far as I was concerned as an enforcer of the law, everyone is innocent until proven guilty. So I played the Saloon card and bought everyone a round of drinks, bringing their hit points up a notch. I was also hoping to win friends and influence people, but was quick to discover that outlaws can’t be bargained or reasoned with.

Slab the Killer was at it again. He played the stick of dynamite which made its way around the table. At the beginning of each player’s turn, the player would draw a card. If that card showed a spade with a number between 2 and 9, then the Dynamite would explode causing that player to lose three hit points. Otherwise, the dynamite would be passed to the next player. To the glee of all the criminals involved, the dynamite made a complete rotation around the table and then stopped in front of Kit Carlson. Poor Kit had a bad luck of the draw, the dynamite exploded and he was the first to buy the farm.

Posthumously, we discovered that Kit was the Renegade. Relieved that a threat had been neutralized, but seeking retribution in the death of an innocent man, the Sheriff made it his task to bring Slab the Killer to justice with targeted shootings. Meanwhile, Willy the Kid ran out of bullets in his assault on Lucky Duke. Both down at one hit point, Lucky challenged Willy to a duel. When a duel card is played against a player, the opposing player must play a BANG! card to return fire. Each player must keep playing BANG! cards until a player no longer has a BANG! card left. Unlucky for Willy, he no longer had any cards left in his hand and received a face full of bullet. This greatly saddened and troubled the Sheriff and myself since Willy turned out to be one of the Sheriff’s deputies.

Quickly realizing that I was the only deputy left in the game, I knew which players were guilty and needed to be brought to justice. I pulled out my rifle and began my retribution on Suzy Lafayette, who was the closest player to me. Lucky mistook Suzy for the deputy and followed me in shooting Suzy as well. Paul Regret, seeing the carnage after killing off Slab the Killer, intervened in our squabble killing off Lucky Duke. Two outlaws down, only the Sheriff, myself, and Suzy Lafayette remained. The Sheriff not realizing who I was due to my undercover disguise started shooting at me thinking I was the final Outlaw. When Suzy had run out of cards, I challenged her to a duel. Empty handed, I distributed the last projectile of justice that sealed the game.

I turned to Paul Regret and spoke to his surprised face. “Congratulations!” I said. Somehow from beyond the grave my fellow deputy Willy the Kid came up to me and extended his hand for a hand shake, his ghost holding a beer excited, “Yes, congratulations! We won the game!” I shook his hand and together we all savored the moment of victory. And that my friends was how the west was won.