In order to capitalize on the success of the best selling game of all time, Minecraft’s license has been used extensively on a host of in real-life products. One of these is the Minecraft: Card Game? card game. Despite the question mark on the cover, it is undeniably a card game. The cards are square instead of the typical rectangular cards you would expect in a normal card deck, but they are cards nonetheless.

The game is designed to be played by 2 to 4 players. There are two types of cards: resource cards and craft cards. Resource cards are used to craft tools: 24 wood, 9 stone, 8 iron, 7 gold, 6 diamond, 11 wild cards, 5 creepers, and 5 TNT cards. A player turns in resource cards to obtain a tool card and with it the number of points that particular tool card grants. The player with the highest point total wins.

The rules are not very well written. It’s almost like the person who wrote the rules never played the game to check that the rules made sense. Most notably there is no mention of how to determine which player goes first. I realize it should be simple enough to roll a die to determine who goes first, but this is a game where turn order actually matters. In a 2-player game, the first person to 24 points is the winner. In a 3-player game, it’s the first player to reach 20 points. And in a 4-player game, the first to 16 points. This potentially gives the first person to play a distinct advantage.

In a similar card game, Splendor, the rules state that if the player who was first to play reaches the winning point total first in her turn, all other players may play to complete the round. This allows every player the same number of turns to get to the winning score. In the Minecraft: Card Game? game I played, the final scores were so tight that using this method only favored one player over another and was seemingly unfair. Another option might be to play multiple games where each player takes their turn as the first player. The player who has won a majority of games is then declared the winner. 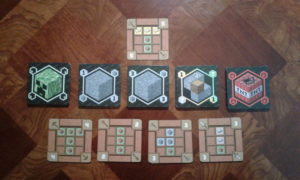 When a player crafts a craft card, they place the number of resources shown on the craft card into the discard pile face down. They then take the craft card and place it tool side up in front of them. (Once again, the official rules don’t make this very clear.) Each tool crafted has a special ability that can be used only once for the remainder of the game. Once the tool has been used, the player will flip the craft card back to the craft side to show the tool has been used. The player receives all of the points for crafting the tool, whether or not the tool is used during the game. A resource card may only be used on one craft card. If you have a resource card that states it is worth 3 diamonds, it cannot be used as 1 diamond for one craft card and 2 diamonds for another craft card.

Using a tool does not count as an action, and can be done at any time during the game even outside of a player’s turn. There are five tools which match up to the five basic tools which can be crafted in the Minecraft open world multi-platform game that we all love: sword, shovel, pick axe, axe, and hoe. The sword allows you to forgo discarding a card when a creeper card is exposed in a resource card pile. The shovel allows you to force one player to have one fewer action on their next turn. The pick axe gives you an extra action on your turn. The axe can be used to provide two wood as a resource. The hoe can be used to take the resource card off of all of the resource card piles directly into the discard pile thereby exposing all of the resource cards underneath.

Finally a player may reserve a craft card to be crafted later. The craft card is placed off to the side into that player’s card holder. As far as I can tell, there is no limit to the number of craft cards a player may place in reserve.

Like I said before, Minecraft: Card Game? is a lot like Splendor perhaps crossed with aspects of Monopoly Deal. It’s not in any way a bad game, but it does lack polish. It is a fun little game if you don’t take it too seriously, but experienced card gamers such as myself might expect something more balanced coming from an experienced game maker like Mattel.