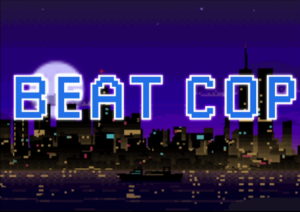 Your name is Jack Kelly. You were one of the best detectives of the NYPD before that fateful night you were called on to investigate a suspected robbery in progress. A sitting Senator’s diamonds were stolen from his safe. You shot and killed one of the suspects at the scene. Unfortunately for you, the missing diamonds were no longer at the scene of the crime, and you’ve just become a suspect.

Beat Cop, a game released in 2017 for Valve’s Steam platform, places you in the shoes of a former detective turned rookie cop that must now figure out who is framing him and clear his name. Developed by Pixel Crow and published by 11 bit Studios, Beat Cop seeks to channel the art and flare of 1980s television police dramas mixed with retro 16-bit classic Police Quest style graphics. The result is nothing short of impressive to say the least. 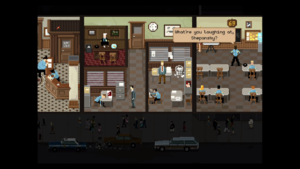 Morning briefing at the police station.

A new game in Beat Cop begins with Kelly’s first day with his new precinct. The game is divided into simulated days of gameplay. At the beginning of each day, Sergeant Holloway lists the tasks he wants the player to accomplish during that day. The player has a wrist watch they can use to track time during the game while they are working their shift on the street. At the end of the day, they receive a day’s recap score card that shows them how they did in accomplishing their tasks. I didn’t do so hot the first day; my performance made me want to go back through and replay it. A rewind feature is included to help you do just that. 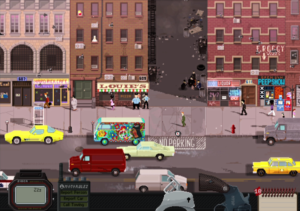 On the street with Fat Mike.

In the first day, the police captain visits Kelly and tells him that he wants him to work on the case of the missing diamonds so he can clear his name. He says there are 21 days left until he retires, which places a 21 day time limit on the game. To add to Kelly’s growing list of challenges, it turns out his ex-wife is demanding alimony, so the player must ensure they are getting enough money from writing tickets in order to pay Kelly’s alimony bills. There are two rival gangs operating on the street where Kelly is assigned. The player through their decisions must balance their interactions with both to succeed in Beat Cop. The first day on the street serves as a tutorial. The player briefly follows Fat Mike around, a fellow officer serving out his final day before retirement. Mike teaches the player the mechanics of the game. Then it is up to the player to introduce himself to people around the neighborhood and start working out the details of Jack Kelly’s new assignment.

Beat Cop is not meant to be a realistic police simulator. Beat Cop is about making tough decisions, roughing up the bad guys, and making it as a cop out on the streets. If you have some idea of how police behavior ought to occur in a game based on real-life rule of law and civil rights, you will want to approach this game with light humor and some flexibility. There is even a disclaimer to this effect near the game’s title screen. This is a fictional game designed for entertainment purposes. 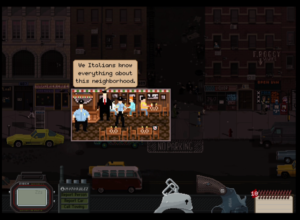 Enter any buildings to interact with people inside.

Which brings me to my only real problem with Beat Cop – the dialog. By day 2 the banter among the police officers in the daily briefing was incredibly racy and I really couldn’t figure out why. Even for police department “knock ‘em down a peg” banter, it seemed out of place. I feel like they could have made the dialog less vulgar without compromising on the classic police squad aesthetic. Despite Beat Cop’s primitive graphics, the situations and themes are at times incredibly adult oriented. Because of these vulgar dialogs and adult themes, I would not recommend that any minors play this game. 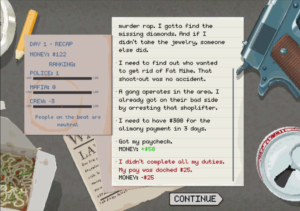 I played through the first day to receive my first underwhelming pay check. I knew I had to step up my game for the next day. Beat Cop is nicely challenging, has colorful graphics, and a killer sound track. Everything included in the game fits within its theme; Beat Cop just feels brilliant. It’s like the game designers knew what they could be good at and discarded all the rest. There’s little where I can blame this game for falling short; it’s kind of a masterpiece. If you like police-style gaming or police movies like the Lethal Weapon series, Beat Cop is an excellent title to add to your collection.

At the time this article was published, Beat Cop was available on the Humble Very Positive Bundle 2 at HumbleBundle.com. If you like what you see here, go there to see about getting a deal on the game and helping charities in the process.