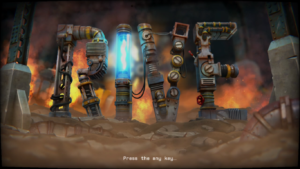 RIVE: Wreck, Hack, Die, Retry! is a title released on Valve’s Steam platform in 2016 by Two Tribes. In it you play as a space scavenger, named Roughshot, aboard a small one-man spider-like spacecraft shooting alien robots, and making daft maneuvers to escape dangerous situations. The player can level up the weapons, armor, and special abilities of their spacecraft. But there is much more to RIVE than a simple action title with RPG elements.

The voice acting in RIVE is phenomenal. Mark Dodson does the honors, and it’s really easy to feel for the character. I felt myself getting excited every time Roughshot would get excited about something in the game. The script is tongue-in-cheek, but feels well prepared. RIVE begins with an explosion that wakes Roughshot. He has to punch his on-board computer to get everything to come back on-line so he can pilot his craft. I suppose being out in deep space will wear on you over time; he really likes to talk to himself throughout the levels. 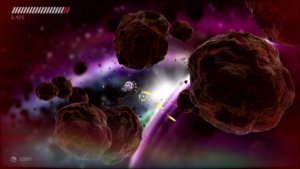 Spanning multiple genres, I would say RIVE: Wreck, Hack, Die, Retry! most closely resembles an arcade shooter, given the way it tracks high scores and throws the player into some heavy action at most every turn. The game starts with an allusion to Atari’s Asteroids, but then turns into more of a platformer soon after when the player enters an environment with gravity. 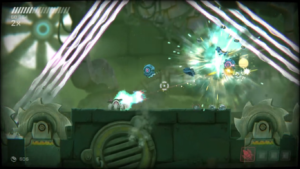 Expect to die, a lot.

RIVE: Wreck, Hack, Die, Retry! certainly lives up to its name. Expect to die in this game, a lot. This is the kind of game where practice makes perfect. It’s also the kind of game where you can showcase your skill. The points you score under hard mode are added to the global leaderboard. Based on your score you can see how you rank with other players in their global ranking. There are also challenges to complete that get unlocked once you’ve completed the first mission. Challenges have levels of bronze, silver, and gold based on their difficulty. 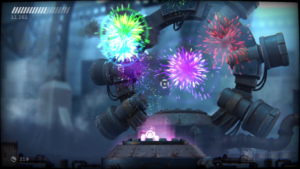 Roughshot shoots off fireworks when you complete a mission.

Another thing you will need to get used to is the harshness of the sound effects. Crunching and scraping metal is common fair for RIVE. Playing this game feels like operating heavy machinery. My wife thought she was hearing thunder outside until she realized it was my game play making the noise. If this kind of noise is not up your alley, one thing I’ve found I enjoy doing with many shooters like RIVE is to mute the volume and have a catchy, rhythmic Spotify playlist playing on my stereo receiver in the background. You won’t necessarily hear enemies sneak up on you, but given that you die and start over a lot in RIVE, I’m not sure that matters. As I said earlier it is nice to hear Roughshot’s voice, but all of his words are subtitled, so you won’t be missing any plot points by hitting that mute button. 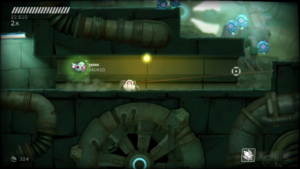 I hacked this sweet nurse drone.

RIVE: Wreck, Hack, Die, Retry! shows itself to be a fantastic shooter and platformer plus so much more. If you are a fan of action and explosions, then this is a perfect game for you. At the time this article was published, RIVE was included as part of the Humble Very Positive Bundle 2 on HumbleBundle.com and will be for another 11 days. If you liked what you read about this game in this first impressions article, go to HumbleBundle.com, and you can get a deal on this game and donate to a charity as well if you like.