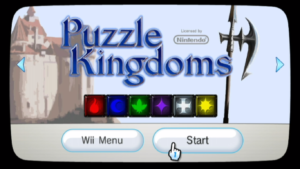 When judging by its cover, Puzzle Kingdoms presents itself as a simple generic jewel matching puzzle game where you get three or more items together in a group and they disappear. While that’s essentially the game play in a nutshell, Puzzle Kingdoms subtly offers so much more. Multiple mini game modes are provided including a two player competitive mode. I played the campaign mode for this initial first impression.

When beginning the campaign mode, the player may pick their character to proceed. The only options are one stock warrior avatar for either male or female. There is no customization here. Even the character’s name is randomly generated. If you don’t like the name of your chosen gender, you can keep clicking on the opposite gender then click back again until you get a name you like. I personally would have liked to have the name ElbinoBunny, but I don’t know how many clicks it would take to get to that. The world may never know.

The campaign mode features a campy, generic fantasy adventure story. The campaign starts off with a slide show presentation cut scene of the story thus far. The player is then greeted with an over-world map from which they can see the kingdoms of the land. All other kingdoms except for the starting kingdom are off limits to the player. The starting kingdom provides the tutorial for how the game is played.

Once the player has clicked on the current kingdom, another comic-book like cut scene begins to give some episodic back story and some super dry campy humor. The story is certainly an acquired taste. I got bored with it the first play through, but as I played through it tonight I have felt the characters grow on me. At first glance the entire Puzzle Kingdoms chronicled saga seems to be filler in between the puzzles which are the main event. Upon further inspection it seems someone actually took some time to create some depth into such seemingly throw away characters. 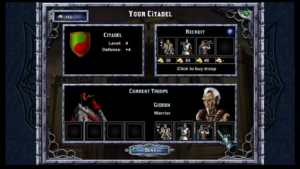 Once all the cut scenes are over, the player receives control of a hero and can recruit soldiers using gold to fight under that hero’s banner. Each hero may recruit up to four soldiers to fight. In the initial tutorial and into the next kingdom, the player may only recruit peasants, archers, and swordsmen. The peasants are so incredibly weak they seemed like a waste of a recruit to me. Archers have increased attack strength, but are weaker on defense. Swordsmen have greater defense, but are weaker than archers on their attack. At the beginning of the game I recruited an extra swordsman because of their greater defensive capability, but there is actually more to this decision than I understood at the time. 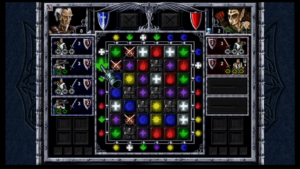 The objective of the puzzle portion of the game is to get three or more symbols (the game calls them power blocks) in a grouping to gain points. This is where having chosen your recruited units is important. Swordsmen may only attack after the player has grouped together the equivalent of three white crosses three times. If the player groups four white crosses, then they get a bonus cross out of it. An archer, however, may attack after two sets of three green leaves, or one grouping of four green leaves have been matched, thereby often getting their attacks out of the gate much quicker. Peasants are the worst requiring three sets of three yellow suns to attack. 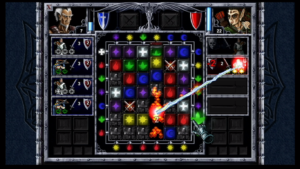 When a player matches three or more of the crossed swords together, a zap of damage is dealt to one of the opposing player’s units. All other power blocks that are not used to provide attack points to units send power directly to the hero. When the hero has enough points, the hero may cast a spell. 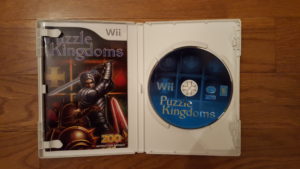 So far Puzzle Kingdoms has been surprising interesting and addictive. Unfortunately while I was working on this first impression the disc I had stopped loading correctly in my Wii U. I was a little shocked at how sorry I was that I wasn’t able to play further in this game. Despite it’s mediocre graphical presentation for the system, the game play feels top notch. I most certainly will try to swing back by and give this one a closer look once I figure out what I can do to get it to load properly again.