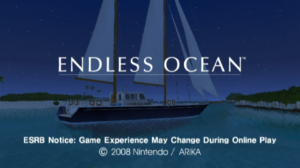 Endless Ocean was developed by Arika and published by Nintendo for their Wii console in 2008. Many critics seem to consider it to be an adventure game. My current impression is that Endless Ocean is an exploration and collecting game, in many ways similar to Pokemon but without combat. The game is set in the fictional waters of the Manoa Lai sea. 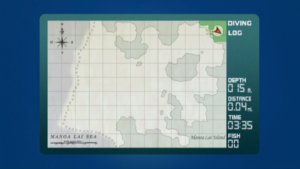 The game begins with a tutorial where the player learns how to use their wiimote to swim underwater while wearing their scuba gear. Katherine Sunday, the player’s partner, instructs the player on what controls to use. The controls seem a little awkward and I’m not sure they were the best choice for underwater swimming. In order to swim, the player presses the B trigger button and then points with the wiimote in the direction they want to go. The wiimote must be pointed at the screen when the player does this since the player’s direction is based on the position of the infrared camera inside the wiimote. If the infrared camera is not detected by the Wii’s sensor bar, then the player halts movement. This was mildly aggravating when people would walk in front of the screen while I was playing. 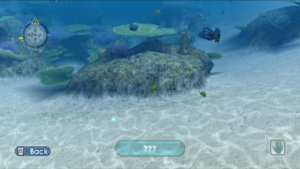 I found a new fish!

Pressing A on the wiimote, the player can interact with various sea creatures. Using the D-pad, the player may pull out food to feed creatures encountered or select the option to return to the boat. When the player first returns to the boat, they are greeted by their partner Kat. She explains how the player’s job and her own are sponsored by the Marinas Foundation. Periodically missions will be sent to the player from the Marinas Foundation that provide direction to the game. Kat makes it very clear, however, that just because the Marinas Foundation writes the paychecks that doesn’t mean she nor the player have to do anything they say. I get the impression Kat would never make it in the corporate world. It is also discovered early on in the game that Kat cannot swim and is therefore not a licensed scuba diver. 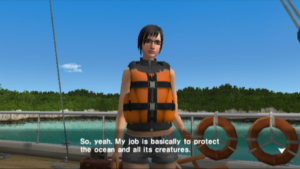 While seemingly short on underwater ocean skills, Kat is supposedly an expert regarding all things wildlife. She has been compiling an encyclopedia of all ocean life around the Manoa Lai sea. The encyclopedia acts as a scrapbook of sorts. There are forty pages of wildlife that fill in when the player discovers them, and there are three types of study milestones that can be achieved with each creature. 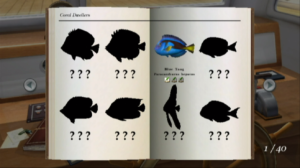 Each discovered creature shows up in your encyclopedia.

The underwater scenes were somewhat breathtaking for the Wii at the time Endless Ocean was released. Given that the Wii’s graphical capabilities are limited to 480p, the graphical experience is somewhat underwhelming today. This might be a good title for Nintendo to release an HD version. The soundtrack is calm and soothing. It appears there are several tracks that can be unlocked as the game progresses which can be selected from the load screen as the player is diving from the boat into a mission underwater. 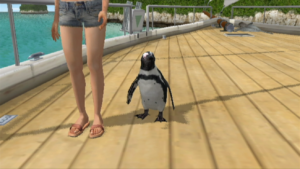 Some creatures come visit you on your boat.

Endless Ocean appears to be a fantastic game for the gamer who loves to explore and collect on their way to completing all the tasks offered. The map and the encyclopedia are inviting, and the atmosphere is calming. This might be an excellent title for adolescents who are old enough to grasp the handling of a wiimote controller. Since I found no overtly frustrating gameplay in Endless Ocean, I would imagine this would be a good game for children who are easily frustrated by more unforgiving and challenging games. Endless Ocean won’t be for everyone, but it may surprise you how much fun this non-game like game is to play through. 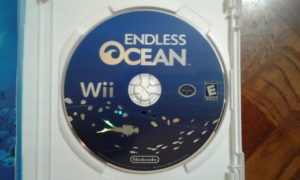