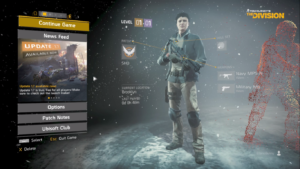 This game was designed to be run on Windows 10 and is fully compatible with Windows 10.

Often Valve’s Steam platform will offer a free weekend on a newer game to allow gamers to try the full version of a game before they decide to purchase it. This weekend’s game is Tom Clancy’s The Division released by Ubisoft in 2016 for Windows 10. The game is set in a post-apocalyptic not-too-distant future where some mysterious highly contagious disease has been released in an act of bioterrorism around Black Friday. People start dying, panic and rioting ensues, and civilization as we know it – at least in New York City – is about to collapse. That is when you, a strapping, youthful, athletic soldier who looks like they were cast for an Alien movie, are called up using a signal to your red wrist-watch. You see, you are a member of the elite group called The Division. They are called in when all other options have failed. 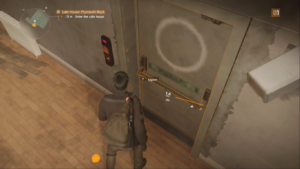 It’s really secure for them to put the HQ behind such a tricky door to open.

Reporting for duty immediately, you learn that you’re part of the second draft. It is implied the first group didn’t make it, and you’re sort of given your first mission. This is one of the interesting things about Tom Clancy’s The Division. I would almost call it a Grand Theft Auto V simulator. It’s sort of open world, but there are very limited things you can do in the open world they give you. If you are frustrated with a quest you are currently working on, run down another street in the city and find a quest that might interest you more, though keep in mind the restricting game mechanics will be present on any quest you choose.

She can jump, she can crouch. She can jump and crouch. Division girl!

My first mission was to rescue food stolen from some rioters. The rioter was behind a barricade of chain-link fencing. The player is not offered a clear jump or a clear crouch button. If you press the crouch button at the wrong place, you will not crouch. If you press the jump button in the wrong place, you will not jump. The game (generally) tells you when you’re standing in front of an obstacle whether you can crouch behind it to use it as cover, or to jump over it to get closer to an objective. In order to achieve my mission, I had to determine which section of the fence I could jump over and stand correctly in front of it while pressing the jump button to jump over it. Others might have more success than I have, but I found the non-player characters to be much more proficient with their firearms from a long distance than I was. Getting as close as possible to an enemy to shoot them and continually moving was my preferred strategy. 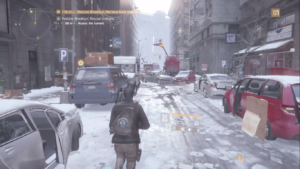 The graphics designers did a good job making foreground blend with background. This is probably the most colorful post-apocalyptic future I’ve seen.

The most frustrating game mechanic was pressing the “Use” key when I needed to. The default for this is the “F” key. Sometimes I would head right for a situation where I needed to press this key, I would press it and the game would progress flawlessly. Other times I would spend ten minutes trying to get my character in the correct position to push the button correctly. In the first mission there is a body that the player is supposed to search to look for clues. I pressed “F” from every angle at every distance for nearly twenty minutes and could not get it to work to progress with the mission. I finally gave up and went looking for other missions.

I found a new mission to rescue some hostages from a bank. In order to get there I had to take a subway tunnel. In order to get into the subway tunnel I had to press the “F” key. It worked perfectly; perhaps I had just been a dumb dumb all those other times. I ran in guns blazing to the bank, got routed by the thugs, and they disoriented me with some sort of gas grenade. Even though I killed three of them, I still died, which caused me to respawn at the beginning of the mission; once again faced with the subway tunnel. I tried again for ten minutes to get the subway tunnel open and eventually gave up. Reading through forums, it looks like this has happened with others running Tom Clancy’s The Division on a laptop. 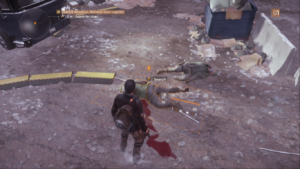 One interesting mechanic included in Tom Clancy’s The Division are special abilities, almost like spells cast in fantasy RPGs, that are equipped by the player and activated using the “Q” and “E” buttons. The player’s character levels up over the course of missions. At the beginning of the game only the “E” button can be equipped with one of three starter abilities. When the player reaches level 5, the “Q” button is unlocked, and as the character levels up, they can pick up abilities with greater power in the game. 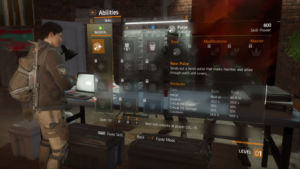 I saw in many of the related forums I read through that four player cooperative play was possible in Tom Clancy’s The Division and that there was also a multiplayer option for playing with others online. Scanning my in-game menu, I was unable to find these features. There is a section where you can add friends and be a part of groups. Maybe I just need a friend playing the game with me. From what I was reading online, it looks like Ubisoft was attempting to make this game a massive open-world experience with most sections being PvE and a section called The Dark Zone for PvP where friendly fire is enabled. I have yet to experience these intriguing offerings.

Some initial connecting took over four minutes. Start game, work on laundry or dishes, and then come back.

I really want to like Tom Clancy’s The Division, but feel like I could have played other games in the time it took me to try to open doors and search bodies. I am not sure I would purchase this one; there are quite a few kinks in the game and it feels like it’s still in beta in places. That being said, a free weekend is a free weekend. Get on Steam, download it, and play it for yourself to see what you think.