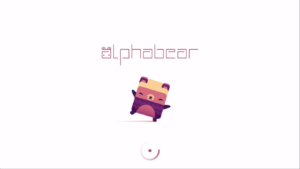 This game was designed for Windows 10 and ran flawlessly when I played it in Windows 10.

Alphabear is a single-player word puzzle game first released for mobile devices on the iOS and Android platforms in 2015. In 2017, the game was released for the Windows 10 and Mac OS X 10.12 operating systems as Alphabear: Hardcover Edition as a download for the Steam platform. The game was developed and is published by Spry Fox LLC.

Within a typical level, the player is tasked with making words from the letters provided in the blocks on the screen. The more letters are used, the more space is freed up on the board which is then consumed by the player’s bears on the screen. Each letter begins with a score count and with a green color. Each turn a letter is not used its color changes from green to yellow to red and its total score count decreases. A deep red letter will become unusable on the next turn and transform into a stone. Stones impede the players ability to grow their bears and should therefore be avoided. 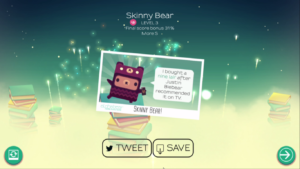 At the end of each level, the player’s score is tallied up and a new player bear is unlocked or a bear already existing within the player’s inventory levels up in ability. This introduces somewhat of an role-playing game element to Alphabear: Hardcover Edition. Prior to entering a new puzzle stage, the player may enter her bear inventory and choose up to three bears on her roster to participate in the next puzzle based on their various abilities. As a bear is gained or levels up, the player is greeted with a screen where their bear is in a selfie containing a cute little tweet randomly generated using the words the player made during the last stage. The player may actually tweet or save these selfies before they progress to the next round if they so choose.

At first blush, Alphabear: Hardcover Edition seems to be just another word puzzle game. I saw it was being offered on Steam’s free weekend, so I downloaded it to write a quick first impressions article. The game install file is only 196 megabytes in size; downloading and installing it on Steam takes virtually no time at all. Not paying attention to the clock, I played it long enough that I almost ran out of space on my game recording device. Alphabear is fun and addicting.

As with other word puzzle games, it is often the case that the player begins trying to coin words that are new to them in order to get out of a tight spot where they don’t know what word they can legally play next. Alphabear: Hardcover Edition offers a dictionary that defines every word that is played. I found this to be particularly helpful when I was just clicking around and stumbled upon a word I didn’t know. This game would be extremely helpful to those who are hoping to get better at Scrabble and actually know the words they are playing. It also appears it might help a child with an elementary vocabulary to learn more words and better spelling for fun outside of their classroom.

As I said, this title is free for the weekend, and only around five dollars retail. I had fun with it and thought it was worthwhile. It may be one of the better edutainment titles I have played. Check it out and see what you think.