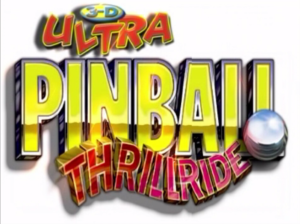 The other week I published a first impressions review of 3D Ultra Pinball: The Lost Continent released by Sierra in 1997. I felt a little bad about that review because it felt like I really roasted Sierra for publishing what I felt was a miserably bad game. I found another game in the 3D Ultra Pinball series that came out three years later in the year 2000, 3D Ultra Pinball: ThrillRide, and decided to give it a try.

It almost seems as if Sierra read my first impressions review from the future when they created 3D Ultra Pinball: ThrillRide. Every complaint I had regarding the previous game has been corrected in this game. The graphics are sharp and crisp. The audio is pleasing. The physics of the balls are more reliable and actually make sense. The game seems fair to play. And, perhaps most importantly, this pinball game is actually a lot of fun! 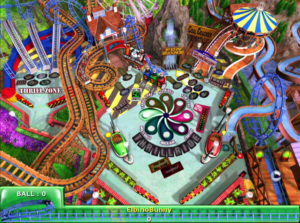 The bumpers are actually bumper cars.

3D Ultra Pinball: ThrillRide is themed off of an amusement park. The main table contains an intersection of entrances to multiple amusement park rides and attractions. Hitting a ball into a ride entrance will start a ride. Some rides like the Flying Falcon and Bumper Cars change the layout configuration of the main pinball table when played. Other rides will take the player to a totally new table for a bonus game. 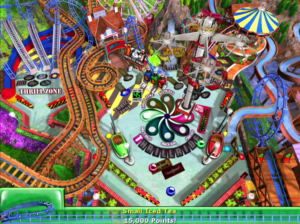 When the Flying Falcon is activated, multiball of four balls occurs all with a different color: blue, red, yellow, and green. Successfully striking all of the colored balls into the ride at the correct time will cause the player to win and complete that ride. It is my suspicion that the player either wins the game or something dramatically impressive occurs when all of the rides have been won or completed. 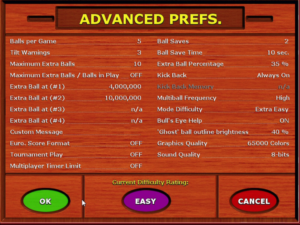 Another nice feature of 3D Ultra Pinball: ThrillRide is the ability to customize the play experience. Selecting an easy, medium, or hard game will reset the custom settings to a default state based on that level of difficulty, but each setting can be specifically customized by the user to create a preferred pinball experience. I am not sure I have played a pinball game with more options than this one has.

In my review of 3D Ultra Pinball: The Lost Continent, I complained about Sticky Keys getting activated on my Windows 10 machine. Once again in 3D Ultra Pinball: ThrillRide, the default flipper controls are set to the left and right shift keys. This makes sense as these are the most logical and natural keys for this purpose on a standard computer keyboard. Getting truly frustrated by my Windows configuration, I looked up how to disable Sticky Keys on my machine. I have posted a tutorial for other gamers to help keep others from being as frustrated as I have been. 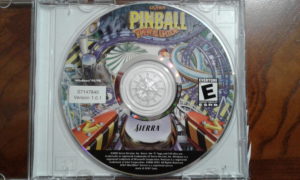 Compared to its predecessor 3D Ultra Pinball: ThrillRide is absolute gold. It brought a smile to my face within the first several seconds of playing; a smile that stayed with me throughout the duration of the game. I wouldn’t say playing ThrillRide has been my best computer pinball experience, but Sierra really redeemed themselves with this one. If you discover a copy of this game in a bargain bin or at a thrift store, do yourself a favor and grab it; this one’s worth it.