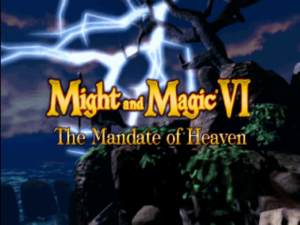 Might and Magic VI: The Mandate of Heaven Title Screen

Might and Magic VI: The Mandate of Heaven appears to run flawlessly in Windows 10.

Might and Magic VI: The Mandate of Heaven Title Screen

Might and Magic VI: The Mandate of Heaven is a Windows 95 role-playing game released in 1998. It was developed by New World Computing and published by 3DO. The game has a Doom-like 2.5D graphics engine the player may use to traverse and interact with the in-game world. The beginning cutscene’s story is simple. All sorts of monsters are invading and terrorizing the land. Some heroes run away from certain doom and are aided by a wizard. These are dire times, and those who are able to stand must somehow be part of the Mandate of Heaven. Obviously I will need to play further into the game to unveil the mystery of these things. 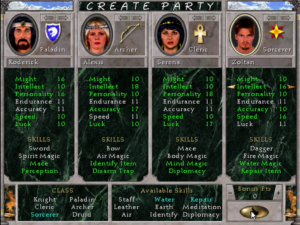 After character selection is completed, the party begins their quest in front of a town. There are a great number of townsfolk there that can be talked to as in most RPGs. I went to talk to a peasant who said they didn’t want to talk to my party and I discovered there is a “Beg” mechanic. Apparently you can beg a person to talk to you. Even stranger was that while I was having Serena, my party’s most diplomatic and charismatic member do all the talking, she often had to beg too. With a goddess-like personality rating of 18, she did receive far more positive responses. Funny enough, whenever she would approach anyone she would say, “Hey you!” I guess when you have a personality of 18 you can just say anything and people will want to please you. 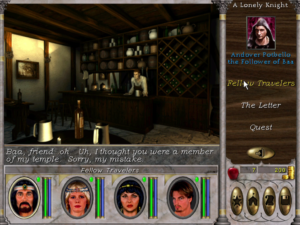 Talk to this guy in the local inn. He’ll give you some gold.

The first thing you will want to do when playing Might and Magic VI is enter the local inn. It is to the right just as you enter town. There you’ll want to talk to a Andover Potbello and tell him about a letter. He will give you 1,000 gold pieces and tell you to scram. Spend this money quickly, because you will lose it when you die.

I decided to adventure around the outskirts of town to check out the goblin critters the townsfolk had been complaining about. Once an enemy is triggered to spot and follow you, I don’t know how you can get them to ever stop following you unless you have killed them or they are dead. I went a little too close to the goblin camp outside of town and around ten goblins followed me back into the city. I did what any sane role-playing game adventurer would in my predicament and hid behind the peasants hoping the goblins would be distracted and attack them. No dice. I ran all over town trying to get away from the goblins. They would completely ignore the townspeople and come directly for my party. Even ducking into a building for a few minutes and then coming back out had no effect. The party vs. one goblin has an easy enough time. Three goblins on an open field are not too great a challenge for the party either. But much more than that and the party is overwhelmed and succumbs to death. When you die, the grim reaper himself greets your party and says (I’m paraphrasing), “You’re done when I say you’re done!” and the party is resurrected to the entrance of town penniless. 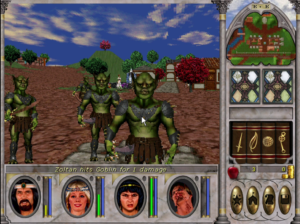 At least Alexis is having fun.

I went out the north, south, west, and east sides of town, and found them all covered by goblins. The only theory I have to adequately begin this game is to get the 1,000 gold pieces and figure out how to smartly equip the entire party for battling a small army of goblins. There are those in the town who will allow you to join the local spell casting guilds for 100 gold each and others who will sell some items to the party. 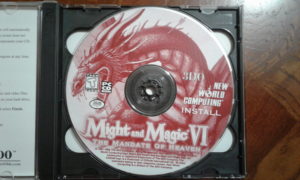 Might and Magic VI: The Mandate of Heaven Game Disc

Might and Magic VI has been an almost comical experience for me thus far. This game is polished and really what I would expect from an early role-playing game from the first person 2.5D game engine perspective era. From what I have read, this game was originally released to critical acclaim. The graphics are decent for 1998, and it seems to have in many ways aged quite well. But it seems like I fumble through the game at every turn in ways that I haven’t experienced in any other RPG. It makes the experience feel so terrible it’s great. This is a title I will need to explore further in a Twitch stream segment. To be continued.