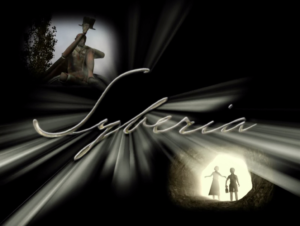 The GOG.com version of Syberia is fully compatible with Windows 10.

Syberia is a visually stunning, point-and-click adventure game released in 2002, published and developed by Microids. In some cases it was also licensed to be published by DreamCatcher Interactive under The Adventure Company brand. Today (November 10, 2017), it is available on GOG.com for free. Because of the mysterious nature of the game, I am placing a spoiler alert disclaimer here. Although I will only be offering a synopsis of the beginning of the game in this first impressions article, the game developers of Syberia did a superb job at introducing background story throughout gameplay. They divulge plot points little bits at a time to reel the player in, and reward the player with more the deeper the player explores. It is for this reason that I will say this is a fantastic game and if you like adventures you owe it to yourself to download Syberia off of GOG.com and play it without reading any further. 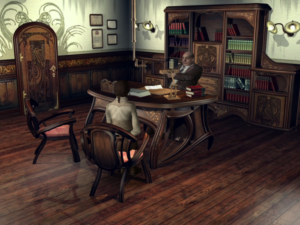 There is so much wood in Syberia.

For those still here I’ll go over the game mechanics and plot. The beginning objective of Syberia is straight-forward enough. You play as Kate Walker, an American lawyer sent by her firm to secure a deal to purchase the famed Voralberg toy factory in Valadilene, France, known for their automatons. Syberia plays in the third person with a stationary or slow-moving camera, zoomed out on each screen. The default mouse pointer in the game is a circle. When the circle pointer glows, there is a door that may be investigated. Frustratingly, doors that don’t go anywhere will also glow. When you click on these, Kate will inform you, “No need to go down there!” Doubly frustrating is the fact that there are more fake doors than real ones. 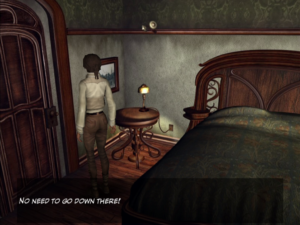 When the pointer changes into a magnifying glass, it is indicating there is a character that may be interacted with. The pointer will change into a hand when hovering over something that may be taken into inventory, and a magnifying glass with a chunk taken out of it indicates the player can use the item underneath the mouse pointer. Inventory may be accessed by right-clicking the mouse. Kate also has a cell phone accessible from inventory that she uses to keep in contact with those in America. This added component really adds depth to Kate’s character.

Some of the screens in Syberia are very large and take a great deal of time for the player to move from one side to the other. This becomes annoying when backtracking across multiple large screens. In order to compensate for this, in most cases the player may double-click in the direction they wish to go and Kate will jog to that location. Sometimes this doesn’t work. I haven’t been able to determine if this is because of a programmatic bug in the game or whether the game developers did not create animations for running in every case required. 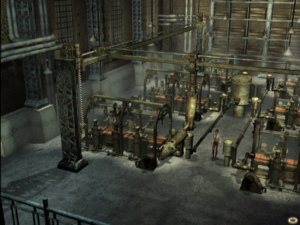 Visually, Syberia feels a lot like Myst, but with regard to story and character, it is so much deeper than the average adventure game. Syberia also scratches the itch of the mechanical gear turning clock punk niche. There is something satisfying about seeing all of the intricate mechanical art. Even though it boggles the mind to even think about how the automatons depicted in Syberia could even work in real life, their animations are inspiring in many ways. Playing this game makes me want to take up the study of mechanical engineering.

The objective of the game seems simple. Meet with Anna Voralberg and negotiate a buy out of her factory. However, Anna Voralberg died shortly before Kate arrives to Valadilene. Easy enough, Kate will simply negotiate the buy out with Anna’s executor. But unfortunately for Kate, Anna’s brother Hans who everyone believed to be long dead is the living heir of Anna’s properties. 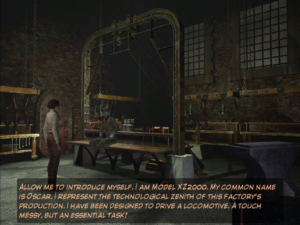 As play continues Kate discovers that Anna had been in contact with Hans, and that most of the automatons coming out of Anna’s factory were based on Hans’ designs. Hans’ latest designs sent to Anna were for a train and a conductor to drive the train so that Anna might come visit after Anna had closed on the sale of the factory. The first section of the game involves exploring the tiny village of Valadilene, meeting Oscar the automaton conductor, and getting the train and Oscar ready for the journey to Siberia to find Hans to purchase the factory from him. Once this is accomplished, Kate boards the train and her journey begins. 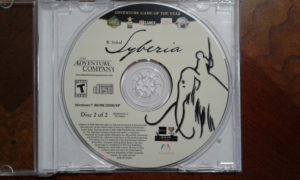 Syberia is a game I often come back to when I’m feeling under the weather and need a good relaxing game with rich story to take my mind off of how sick I’m feeling. Sometimes the background music will hit a note that would indicate an impending jump scare in any other game. So far, I have found nothing of the sort in Syberia. It’s entirely mellow and intriguing. If you are a fan of adventure games, I would strongly advise adding this one to your collection.