In 2007, National Geographic released a movie to theaters called Arctic Tale. It was a documentary that focused in part on a female polar bear they called Nanu. To capitalize on the release of this film, a game with the same name was developed for the Nintendo Wii by Atomic Planet Entertainment and published by Destination Software in the same year. It says on the cover, “Play through the adventures of the major motion picture!” Arctic Tale may be played by one or two players. I didn’t have anyone to play with me this time, so I’ll have to review the two player option at a later date. 🙁

When starting a new game in Arctic Tale, the player begins as a little polar bear cub. You walk around collecting silver and gold paw print tokens. Press the A button to walk around the landscape. The silver tokens provide bonuses and unlock game features, while the gold tokens level up your bear. Be careful of predators and larger polar bears. They want to eat you for breakfast. Run away from them by pressing B. Collecting dead animals replenishes your health. Also strewn across the landscape are larger markers indicating an available mini-game. 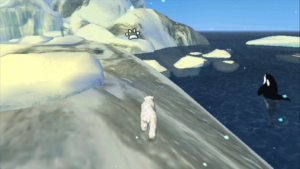 The primary purpose of playing Arctic Tale so far appears to be to collect tokens, fight other creatures in the wild, and get bronze, silver, then gold rankings in the mini-games. I suppose this is really par for the course as far as Wii games go; Arctic Tale was released in the hay day of Nintendo Wii mini-game titles. The four mini-games I played in my first encounter with Arctic Tale were Scavenge, Balance Fight, Ice Slide, and Shuffle Bear. 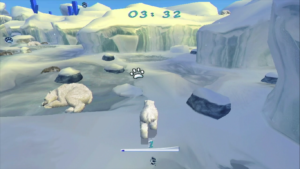 Hunting for seals while trying not to wake up papa bear.

In Scavenge, you attempt to steal the required number of dead seals while sneaking around sleeping grown male polar bears. If you wake the bears, they will attempt to attack you so be wery wery quiet. If you see a line of flashing sparkles, don’t walk over to it unless you have your quota of seals. That is the boundary of the mini-game and the game will end when you cross it. I curiously crossed this line when I was close and had to repeat the whole experience. It was a little irritating. 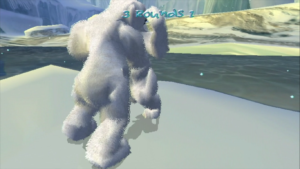 I’m gonna push this bear into the water where he belongs. I’m king of this ice.

In Balance Fight you are trying to knock a fellow polar bear cub off of a tiny floating piece of ice that forms a little sumo wrestling arena. There are some quicktime events that prompt the player to push a button or wave the controller in a specific way. Do what the game says and it’s not hard to get the gold snowflake in this mini-game. 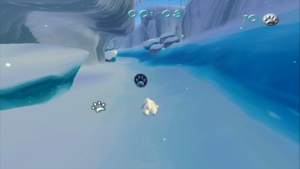 Ice Slide is like playing Tux Racer on any Linux box. The controls seemed awkward, but it may be I am not practiced enough with them yet. It could also be this is what happens when you have multiple types of mini-games in a single title and use the same control system for all of them. People who have played the Rebel Assault series may know what I’m talking about. 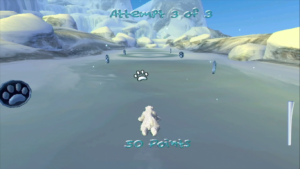 The best mini-game I played in my first encounter with Arctic Tale was Shuffle Bear. I’m a big fan of shuffle board, and this is the same thing but with a polar bear instead. Just charge up your bear and see if you can hit the bull’s eye. I got the game Arctic Tale by fishing through a bargain bin. I really got this game because it looked like a good beginner title for small children; I thought my son might like it. But paying a couple bucks to play shuffle bear was worth it for me. 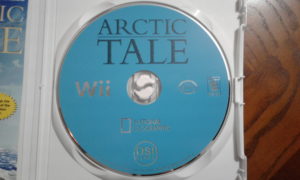 It will be interesting to see what other things this game has to offer. While Arctic Tale teaches players about polar bears, it has yet to demonstrate itself as a truly edutainment title. Playing Arctic Tale is about as educational as riding the rides at Sea World without reading any of the literature associated with the ride while in line or on the way toward the ride’s exit. The game thus far hasn’t attempted to define itself in any way or give me any idea of what to expect as I continue in my objectives through it. At first blush, I would imagine I have already seen is all there is to see: lots of snow, killer whales in the background, mini-games, and feeling what it’s like to control a polar bear in a game. But is much here that seems to subtly hint that there is more to come. As it stands, Arctic Tale has impressed me more than most three dollar titles do. If you have small children, this is a fun and safe title for them to play, and at the price I paid well worth it.