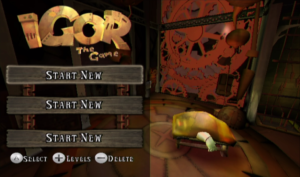 Released on the Nintendo Wii in 2008, Igor: The Game was developed by Santa Cruz Games and published by Legacy Interactive and SouthPeak Games. Igor: The Game begins with protagonist Igor explaining his dream to be a somebody. In Malaria the somebodies are all evil scientists. Since Igor entered life with a hunchback, he was relegated to being a servant to the mad scientists. Therefore he has covertly been working on his inventions in secret in order to create something that will win the annual Evil Science Fair. All of the other characters beside Igor that may be played: Scamper, Brain, and Eva, are all creations of Igor. Eva, Igor’s most recent creation, was created to win first prize in the Evil Science Fair. Unfortunately it turns out she is not at all evil, and it is now up to the player playing as Igor to figure out how to still win the fair.

The storyline to Igor: The Game is creative and clever. It is funny, and has a sort of Addams Family feel to it. The game is based on Igor a motion picture that was produced by Exodus Film Group and released by MGM in 2008. In the beginning cutscene, the player is greeted with the familiar looking Frankenstein-like lab. There is a creature on a laboratory table and mechanisms all around. Igor calls for Brain to pull the switch and the lights go off. After reprimanding his creation, the lights come back on and the correct switch is pulled. Lightning surges into the operating table and Eva, his new creature, immediately comes to life and darts through the walls making her escape toward the local home for blind orphans. They chase after her, seemingly half hoping she is not doing anything to get into trouble while also hoping she is creating all sort of havoc. I’ll admit, I chuckled. This game seemed like it was off to a good start. Unfortunately the gameplay is not as good as the lines and characters in the cutscenes.

Every room feels huge and takes some time to traverse.

I wonder if Igor: The Game was tight on deadlines and raced out the door to be released in time with the movie. One thing I noticed very quickly when I played it was that the environments are huge compared to the size of the player characters. It takes a good bit of time for the player to walk a character across a room. To compensate for this, the players can jump to heights that appear to be relatively higher than what I would have expected and seem to hang in the air longer than expected. It’s almost like the designers just turned gravity down in their game engine configuration to solve a problem that should have been addressed more geometrically. Both of these issues combine to make the game seem incredibly awkward. I realized after pondering the awkwardness for awhile that I would wager they made the environments larger in order to accommodate a more primitive camera for the 3D environments. If the room is bigger with high ceilings, you don’t have to worry as much about keeping the camera being in a difficult position for the player to view the character they are controlling. While I experienced no actual bugs while playing this game, it feels more like a polished alpha build with production cutscenes than a full production title. 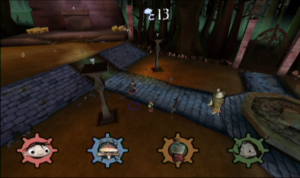 You can’t hear it here, but the background music is an annoying voice going, “La, La La, La Laaya Laa.” I’m sure parents loved this game when it came out.

One of the selling points of playing Igor: The Game for me was the fact that it allows up to four players to play cooperatively simultaneously. I figured it therefore might be a good game night title to invite friends over to play together in one sitting. While I praised Lego Pirates of the Caribbean: The Video Game for its fantastic split-screen mode in an article published the other day, there is no such split-screen in Igor: The Game. Given that the environments are large relative to the size of the character playing, even when there are two characters it is easy for their mobility to be impeded when they both find themselves on opposite sides of the screen, especially in the middle of fighting dangerous monsters. There were numerous times when my teammate and I got increasingly frustrated due to being stuck depending on the movements on the other until one of us gave up in our objective and walked back over to the other player.

Beating mechanical chickens and bashing crates is about all we’re doing here.

The meat of the gameplay in the little we played of it was to collect flowers and nuts and bolts, and to fight wind-up chicken things. It felt like it took forever to clear a single room of enemies and collect all the loot necessary to proceed to the next area. Once an area was completed and we had reached the furthest extent of the room, it would take forever to backtrack to the exit to move to the next area. While the cutscenes were mildly entertaining, the gameplay was downright tedious.

I’m not really sure who would really benefit from playing Igor: The Game. If I were a small child, perhaps a fan of the movie, and this were one of the only games I owned for a gaming system, then I imagine I would be blind to its flaws and just enjoy it for the game it is. But given that this game was a chore to play in the brief time I began playing it, I don’t think it would be one I could see myself recommending or even agreeing to play on a random game night where my friends and I might be browsing through my game collection unsure of what to play next. My advice would be to skip this one over unless you enjoy being a thorough collector for the Wii.