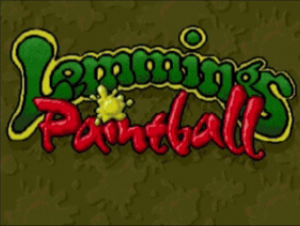 This game works nearly flawlessly on Windows 10. It runs at a low resolution in windowed mode. Attempting to make the game full screen will not work.

Few games have left a more lasting impression on me than Lemmings, the puzzle sensation that came out on nearly every platform starting with the Commodore Amiga and the Atari ST in 1991. My dad got one of the early Atari ST copies through the Atari User’s Group he was a member of. Lemmings was a game of great fun and great frustration for me. I loved and hated how hard the puzzles were.

I was just starting to learn how to read in grade school at the time, so reading manuals was a struggle. Lemmings had a manual that was in comic book format, so it was pretty easy to read for children like me. It didn’t matter if you had no manual though, Lemmings started you off easy. Level one taught a simple concept; just dig. Each level built on the one before it, spoon feeding you as you went. By the time you beat Lemmings you were ready for the expansion pack, Oh No! More Lemmings! that came out in the same year. That was the puzzle game that really kicked my butt. 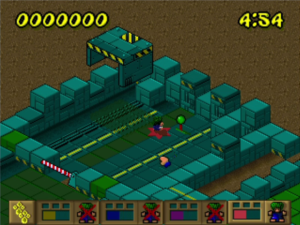 When I first saw Lemmings Paintball in the stores in 1996, it was at a time when paintball was becoming a popular sport. My friends and I would go play paintball in the new paintball arenas that were popping up at the time. There were all sorts of other video games attempting to simulate paintball; though they were primarily first person shooters. Judging by the box, it looked like Lemmings Paintball was an isometric action title departing from the spirit of Lemmings games past and Lemmings games to come. I recall attempting to bill it as a puzzle game to my parents to get them to buy it for me as an edutainment title. I thought if I could associate it with its Lemmings heritage, they might purchase it for me. But based on the same packaging, they also believed Lemmings Paintball had to be an arcade action game (a.k.a. a waste of my parent’s money). 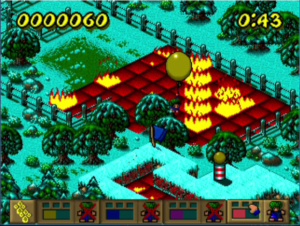 You can fly a balloon over obstacles.

This was a real shame because in the brief time I have played Lemmings Paintball I have found it has offered me an experience that was closest to the fun I had playing Lemmings on the Atari ST. Playing Lemmings on the Atari ST now isn’t the same as it was. I have been spoiled by better computer mice on the PC. Going back to the Atari ST mouse is cumbersome and frustrating. Playing Lemmings on MS-DOS isn’t the same experience either. The graphics are far inferior and the sound quality is abysmal in comparison to the rich MIDI music of the Atari ST. Lemmings Paintball seems to be the compromise. With the release of Windows 95, the PC had finally come into its own for gaming. This game seems to showcase this for me, acting as a bridge between the Atari world I came from and the PC world I entered into. 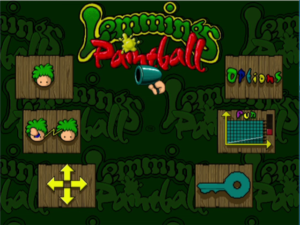 After Lemmings Paintball’s initial opening cutscene, the game enters a menu system that is modeled after the ones familiar to Lemmings players complete with large square buttons and the lemmings hand used as the mouse cursor. It appears there is a two-player mode, but I have yet to try it. Entering single-player mode starts the game at the first level. Just like Lemmings games past, Lemmings Paintball has a password system by which you can jump to any level using its password. 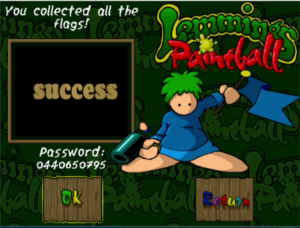 The levels start out easy, teaching a new concept each level. The controls are a little different from past Lemmings games, however. Whereas in the original games you would click on an ability and assign it to a lemming to lead all the lemmings to the promised land, in Lemmings Paintball all lemmings have equal ability and the objective is to take the flag in each level without losing your last lemming. The puzzle is in guiding the lemming or lemmings to interact with their environment to get to the flag instead of changing a lemming here or a lemming there to enable a certain percentage of lemmings to exit the level. 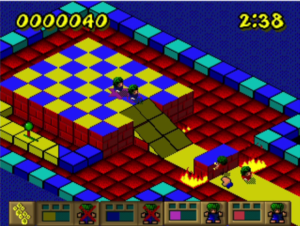 Mmmm, right in the face!

Each level starts with the available lemmings being dropped into the puzzle just like in the original games, but this time in a three-dimensional, isometric view. When a player clicks on a position on the playfield, the activated lemmings will walk in a line as straight as possible to that location. If there is fire in the path they are walking they will walk into it and burn up, so if there are dangers it is best to carefully avoid them by clicking with small baby steps where the lemmings need to go. If there are multiple lemmings available to the player at the beginning of the level, then each lemming can be selected individually and moved separately from each other. Sometimes a player will find that they no longer have enough lemmings to complete a level because the lemming or lemmings they needed died or got stuck. When this happens, you can click the pause button to pull up a menu to restart the level. 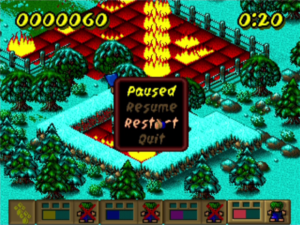 There is paintball ammo that may be picked up to equip the lemmings’ paintball guns. Lemmings shoot at the position of the mouse cursor when the right mouse button is clicked. In a sense, given that the lemmings do have enemies in the level, this component to the gameplay is an action game element. However, the action game element I experienced was never any more reflex dependent than being absolutely ready to click on the bridge-builder lemming at just the right time to keep him from shrugging his shoulders and stepping off his bridge into oblivion as I have already experienced many times in the original Lemmings game. 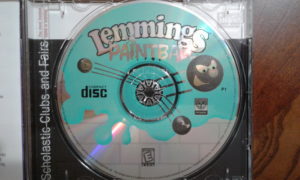 Lemmings Paintball is truly a puzzle title. The player must flick switches, figure out how to raise and lower platforms, avoid dangerous obstacles, ride balloons away from danger and effectively neutralize enemies between themselves and the flag they are attempting to seize. On one hand, there are paintballs and paintball guns in this game, so it is aptly named. On the other hand, it is a shame they named the game the way they did, because I am certain more people would have given this game a second look if it had been advertised more as a Lemmings title and less like another mid-nineties action title. Given that it works well in Windows 10 as a desktop game, maybe fans of the older lemmings games will take note and give this one the shot it deserves.