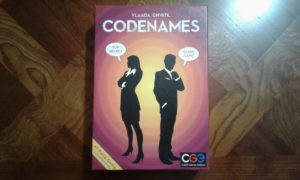 Codenames is a party game for two teams consisting of at least two players on each team. The best game I have played so far is one where there were five players on each team and the team member playing spymaster rotates within each team on each round. Codenames was developed by Vlaada Chvatil and released in 2015 by Czech Games. 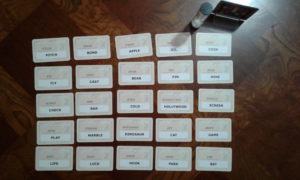 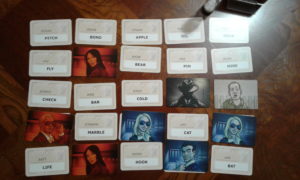 On the blue team’s turn their spymaster might say, “Jurassic 2.” Then players on the blue team might point to the codename “Dinosaur.” At that point the spymaster would place a blue card over the codename “Dinosaur” and the blue team will have scored a point. Given that the spymaster stated that there were two cards corresponding to the clue “Jurassic,” the players on the blue team might want to choose again. If they were to choose “Hollywood,” the assassin would be revealed. This is kind of like knocking the 8-ball in a pocket at the wrong moment when playing pool. When a team reveals the assassin the game is over and they lose the game. If instead the blue team had chosen “Screen,” an innocent bystander card would be placed over the clue and the blue team’s turn would end. Play would then go back to the red team. Once a team has correctly guessed the number of codenames their spymaster has given them, if they are bold they can continue guessing. This is helpful when a team is behind and wishes to make a Hail Mary effort to catch up and win the game.

The first team to guess all of their codenames correctly wins the game. The codename cards have codenames written on both sides of them. To quickly set up a new game, simply flip all of the cards over and then choose another key card. Codenames is a fun game for parties as it can be played with nearly any number of players and its easy to learn. I would recommend that this game be in any serious board gamer’s collection.