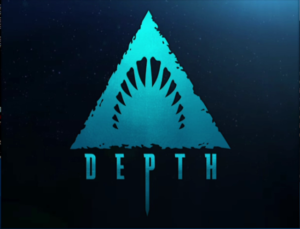 Are you a fan of shark movies? Do you get excited for shark week on The Discovery Channel every year? If so, you might want to check out Depth a sharks vs. divers underwater combat game released on Valve’s Steam platform by Digital Confectioners in 2014. This weekend Depth is free to play on Steam, so it is the perfect time to try it to see if you like it.

I would recommend starting the tutorial in solo mode before venturing off into on-line matchmaking so you’ll have an idea of what you can do with your shark or diver. I went directly into a match upon starting Depth. I enjoyed swimming through the water as a shark and felt fairly capable. I bit some divers a few times, but couldn’t quite get a kill and would get killed very quickly. Movement and basic operation is fairly simple if you have played other first-person shooter games. The diver can swim around and shoot his gun or stab his knife, while the shark can swim around and bite things. The key to being good at Depth is to use the special abilities of the diver to evade the special abilities of the sharks and vice versa. The tutorial instructs the player in many of these things. 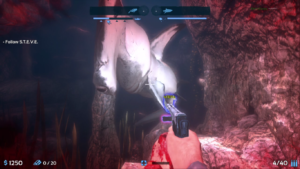 I got him. You’re not smiling now are you, ya jerk?

In a full match, there will be four divers huddled close to S.T.E.V.E., their underwater robot lifeline, and four sharks trying to eat them. Divers can collect treasure and turn it into S.T.E.V.E. to get cash to buy better weapons and supplies. Divers can use sonar to look for sharks and use flares to light up dark areas. Sharks can evolve to evade sonar or detect humans easier in the water. Divers will die quicker if you chomp them and then quickly move your mouse back and forth, simulating thrashing and grinding your sharp teeth in the water. Divers may use medkits to heal themselves, but sharks eat seals to regenerate hit points. The sound engineers did an excellent job in using sound effects to make you feel evil with the pitiful, begging cries from the seals as they are chomped and thrashed around in the shark’s mouth. 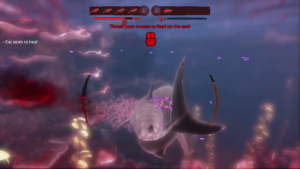 The cries of this seal are pitiful. 🙁

There are different classes of shark. Some are built for speed, others for constitution, while others have a stronger attack. Each shark class corresponds to a different species of shark, so if you are particular to the great white or hammerhead, you can pick them accordingly.

For a game that came out in 2014, Depth really looks quite good. The detail of the underwater life is nice. There is a lot of variety in the artwork. You can also purchase special skins to make your shark unique in Depth’s micro transaction store. 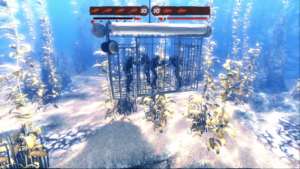 These divers look so tasty.

The solo mode outside of the tutorial will allow you to play with bots on easy, medium, and hard difficulty to give you some practice outside of the on-line matchmaking mode. I’m not sure how much fun that would be given that this game was meant to be multiplayer. I would expect it to get bland after a short while like the solo modes in other multiplayer tournament games do.

If you purchase a copy of Depth, you will receive additional quests to complete. Because I don’t yet own a full copy of this game, I wasn’t able to test this feature. Outside of that, this game is pretty much what-you-see-is-what-you-get. It’s 4 vs. 4, sharks vs. divers in match-making mode with fancy skins you can outfit your player in.