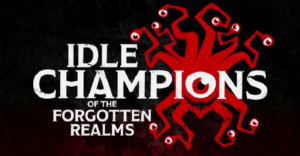 Idle Champions of the Forgotten Realms is a point and click, hack and slash, grind fest developed and published by Codename Entertainment. The game is a licensed Dungeons and Dragons title. It was released for Windows 10 and Mac OS 10.12 in 2017.

Idle Champions of the Forgotten Realms plays similar to a tower defense game. The player’s party inhabits the left most part of the screen while enemies advance from the right. As the enemies approach, the player may attack them by clicking on them. This deals a small amount of damage and slows the enemies down. Members of the player’s party will also attack when they are able and deal an amount of damage proportional to their current level and ability. 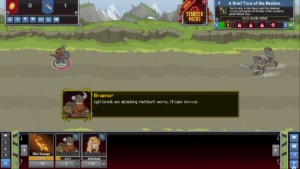 When an enemy is slaughtered, the enemy will drop gold pieces that will accumulate in the player’s purse. The player may use the gold to level up their characters, hire new characters, or level up the damage dealt by their click attack. The game is divided into stages. Each stage has its own objective that must be satisfied in order to progress. Most of these objectives deal with killing a certain number of creatures or collecting a certain number of items. There is a boss at the end of every fifth stage that must be defeated to move on to later stages. 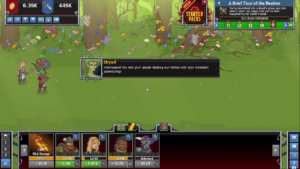 I feel your pain, Dryad.

It is challenging to describe what genre of game play Idle Champions of the Forgotten Realms most closely resembles not because of any particular originality or creativity, but due instead to the fact that it doesn’t feel particularly like a game. There are certainly game mechanics here, as I said before there are hack and slash role-playing and tower defense elements, but the game is really one big needless grind. All a player does when playing this game is click a green button across the bottom of the screen, collect gold by hovering the mouse over said gold, or click on an enemy to deal it a small amount of damage. 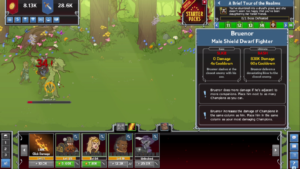 Boss making her way through my party.

Outside of clicking to level up your characters, no other action is actually necessary to play the game. The gold automatically enters your party’s inventory when your party walks close enough to it. If the characters are sufficiently leveled up, they will take out any enemies before the player would ever need to click on them. In later stages, ranged units can become a pest if not eliminated quickly by the player’s click attack, but I haven’t noticed them provide enough damage to truly influence the outcome of a stage for the party at large. When a boss or an overwhelming number of units slaughter one of the party members, as long as the boss or enemies are defeated, that player will simply respawn with full health in the next stage. If for some reason the player’s party can’t successfully defeat a boss, the game sends the player and her party back to a previous stage to level up their characters until the boss can be defeated. 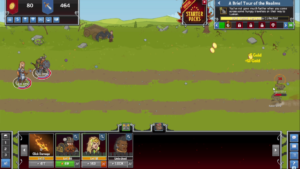 The only other place Idle Champions of the Forgotten Realm could redeem itself would be in having a rich story at the book ends of the long arduous grinds of sitting and watching your characters slowly make their way through the levels. The story is paper thin; it is not at all what I would come to expect from a Dungeons and Dragons title. The characters have zero depth. In the first 30 minutes I played Idle Champions of the Forgotten Realm, I played two stages where the whole point was to collect food for a village and the party. Those stages played like bonus rounds where rabbits and wolves that were easy pickings came slowly up to the adventurers to be easily slaughtered for quick gold. These stages left me scratching my head wondering what the point was.

Idle Champions of the Forgotten Realms seems to be bug free and plays moderately well for what it attempts to achieve on my Windows 10 system. That being said, it has felt like a complete waste of time for me that isn’t any real fun. This game is free for the next two days on Steam as a promotion to get people to play it. After 30 minutes of playing it myself I feel it’s a shame they can’t give me my 30 minutes back.