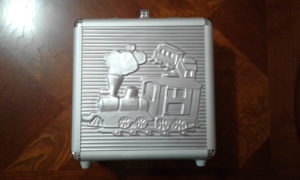 Cardinal’s version of Mexican Train is documented to support 2 to 8 players. It is played with a set of double-twelve dominoes. I’ll cover other variations in the future, but this is the one I learned how to play first.

Play then proceeds clockwise around the table from the person who played the double. In their first turn a player may start their own train. They do this by placing a domino that has a side that matches the current number represented by the starting double. Trains come out of the center like spokes on a wagon wheel. In the first round I would be able to play a domino that has a twelve on it to start my train. If I had no domino with a twelve, I would then have to draw and place a marker on the place where my train would be. In the Cardinal Mexican Train domino set I have, there are small colored plastic train engines provided that may be used as markers. In the past when I didn’t have such frivolous gaming equipment, I would use a penny or bottle cap as a marker. Any sort of token will do.

While the token is on a player’s train, and it must remain there until the player’s next turn, any other player may play on the marked train instead of playing on their own. They may also start the Mexican Train, a public train that anyone may play on. If a player has a marker on their own train, and they play on the Mexican train or someone else’s train, the marker on their own train comes off of their train until such circumstances where it may be put back on their train again.

To review, a player’s turn consists of playing or drawing. If they draw, they must place a marker on their train to indicate it is open for others to play on. Players may play on their own train, a marked train, or the Mexican Train. If the Mexican Train has not been started, it may be started off to the side of the other trains in the same manner the players’ trains were started. If a player plays a double, they may play again. The objective is to run out of dominoes in your own hand.

When a player is down to their last domino, they must tap it on the table to indicate there is a likelihood that they will run out of dominoes in their next turn. This is similar to calling out “Uno!” in Uno. If you get caught not doing this, all the other players may call you names and force you to draw two additional dominoes into your hand.

When a player runs out of dominoes, all of the other players count up the face value of all the other dominoes in their hand. This becomes their score for the round. Scores are summed up and carry forward for each player from round to round. The player with the lowest score after the double-blank round wins the game.

Mexican Train is primarily a game of chance and is fairly easy to learn, which makes it great for children. There are some elements of strategy, however, that can keep it interesting. It is usually best to play your highest point dominoes as early and as frequently as possible so they are not left in your hand by the end of the round.

It’s also good to learn when to be nice and when to let someone stay stuck. In the last game I played, one of my opponents needed a domino she didn’t have and had placed a marker on her train. I had the very domino she needed, but did not provide it since she had fewer dominoes in her hand than I did. I let her sit there for several turns until she had accumulated a hand that was sufficiently and safely larger than my own.

Take care in how you arrange your domino hand since one side of it is somewhat public for others to see. On one hand, you will want to arrange your dominoes in such a way that you have a plan for every one you play so you make the maximum use of each one On the other hand, if people can predict by the way you’re arranging your dominoes which one you plan to play next, and that you are a certain number of turns from going out, they may play accordingly in a manner that is not in your favor. Just some food for thought. 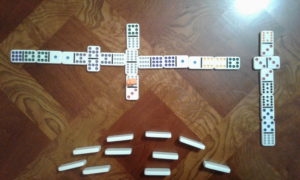 Double-twelve dominoes are really easy to find in all sorts of stores. Outside of playing cards, I can’t think of any other piece of gaming equipment that is so versatile in being used to play more distinct kinds of games. Dominoes are also spill and dirt resistant. They are handy for when I want to play games outdoors. I don’t ever worry about getting dominoes dirty. If you don’t already have a domino set and you want to consider yourself a board gamer, then you owe it to yourself to go get one. Mexican Train, is just one of many games you can play with it, though it is a fun one; one I would recommend everyone try.