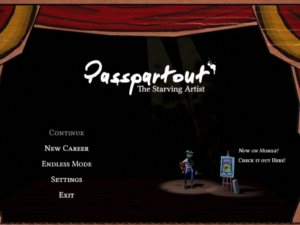 Passpartout: The Starving Artist is an artistic painter simulator with money management elements developed and published by Flamebait Games. It was released in 2017 for the Steam platform and runs on Windows, Linux, and macOS.

In Passpartout: The Starving Artist the player plays the part of an artistic painter. The player paints on an easel in a manner that appears similar to the Microsoft Paint user interface. Starting with one brush, the player must paint something worthy enough to sell to her critics in order to pay her bills. As the title “The Starving Artist” seems to suggest, as the game mounts in challenge it may be harder to sell paintings and pay the rent. This might make this the world’s first arcade painting simulation. When beginning a new game, a screen greets the player with the words Act I. I assume this means that there are multiple acts and settings to play through to the game’s completion. 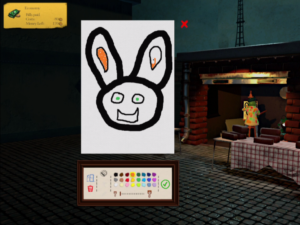 I began my time playing Passpartout: The Starving Artist drawing my old favorite, a simple bunny. I titled my work and placed it out for the attention of the waiting public. Surprising to me, it sold rather quickly for 127 dollars. I figured I must be a natural painter born with the innate talent to produce masterpieces, so I began my next work. Once a player is satisfied with their painting, there is a button to take a screenshot of it in Steam and another button to tweet it out on Twitter for those who are so inclined.

Incredibly in my time playing, Passpartout: The Starving Artist helped me get in touch with my stream of consciousness as I let my whims guide the brush to produce meaningful colors and shapes to the canvas. Despite the necessary cheesiness of the art produced using the primitive artistic tools provided to the player by the game’s user interface, I found the game to be extremely relaxing as I was able to lose myself in the production of art from deep within my being. The game music puts you in the right mood to feel loose and creative. This game started out feeling good for my soul. 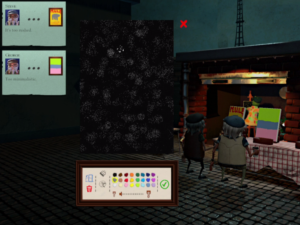 My Ego, it is Bruised

Then came the critics. Passpartout: The Starving Artist is a very realistic artist simulator in one sense. Non-player characters will walk by your works of art on display and critique, nitpicking every little thing they can. You cannot please most anyone mostly all of the time. Anyone who is not actively buying a painting is continually berating you for your misuse of color, lack of detail, grossness of style, or for selling out to the man or producing art for quick cash. The criticism also appears to be subjective. I painted a painting with every color available to me in it, and I was told that all of the colors were bad by one critic. At first it’s cute and clever, but over time it really began to grate on me. Although, this game might provide inoculation toward haters commenting online if I want to branch out and start uploading YouTube gameplay videos. 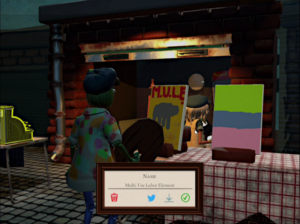 Title your masterpiece, then hopefully it will sell.

Another clever distraction for while you are painting are the news flashes that popup on the screen parodying the ridiculousness of real-life click bait encountered while browsing online. These add some humor and levity to Passpartout: The Starving Artist, but still detract the player from the relaxing focus at hand – putting art on the easel. I don’t think I have ever had so many emotions form in a short period of time from playing such a simple game. In my first hour playing I felt relaxed and free to express myself in my art, then frustration with the criticism of my work, then triumph when I would unlock a Steam achievement, then mild humor when I would read an odd news flash, and in between all these emotions boredom when I felt I had, at least in that moment, exhausted all the game had to offer. 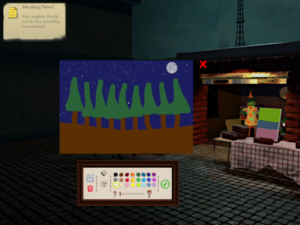 As I stated earlier, Passpartout: The Starving Artist provides the player with only one type of brush to begin play with. As the player sells paintings and progresses they may unlock other brush types. Perhaps I don’t have the most artistic mind after all, but I frequently would reach moments in the game within the first hour of gameplay where I wondered if I had just seen everything the game had to offer. Shortly after having such a thought, I would unlock an achievement or unlock a new brush, but such things were not quite enough to keep the thoughts of the game’s minimalist nature at bay.

While there were elements to Passpartout: The Starving Artist that I really enjoyed in the time I played it, I wonder if I could get similar results by putting on some soothing music on my stereo, fire up Microsoft Paint, and get busy producing works of art with the full set of brushes unlocked without all the noisy, nosy critics. While the game itself is currently $9.99 on Steam, the original sound track is priced at $4.99. It might be more of a deal to have the soundtrack and supply your own paint program. Passpartout: The Starving Artist is a fun enough game, I think I would buy it in a heavily discounted Steam sale knowing what I know about it now.