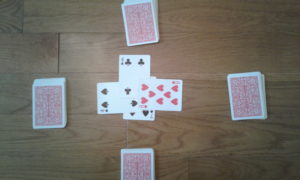 The other night I attended a game day with many people from my local church. I noticed that while a large number of people showed up with the expectation of having a great deal of fun, few were willing to take a plunge on learning a game they had never played before. It seems to me that most people get awkward when approaching a new game. Perhaps they don’t want to appear ignorant or less than proficient at something they don’t have much experience with. Most of the family classics were represented. There was Battleship!, Yahtzee, Jenga, Connect Four, and all sorts of games high on luck with little skill required. I will admit Jenga requires a great level of skill, and the Jenga game played that night was phenomenal. More on that in its own game review. In general however, it is my hypothesis that most people who would consider themselves to be non-gamers prefer games of chance. If they lose they can always blame their situation on simple poor circumstance.

I tend to be the opposite when it comes to these types of game gatherings. Because of my highly introverted nature, talking about a complex game helps me ease into social interaction with people I don’t know well. I think I’d rather play a game I had never encountered before, because talking about that game helps me overcome my social anxiety just enough to break the ice. Gamers who have never met but share a love for a game in common can talk strategy and experience. Doing so conjures up all sorts of powerful good memories that they share in common which in turn builds rapport between people who were complete strangers prior to that interaction.

I think I am going to come up with a new scale to publish along-side all of my game reviews to measure a game’s position on the chance/skill spectrum. Yahtzee might be an example of a game solidly on the chance end of the spectrum with no skill. Maybe it should receive a 100/0 chance/skill rating. Then there is the game of Chess which is solidly on the skill end of the spectrum. Obviously this would receive a 0/100 chance/skill rating.

So I stood there awkwardly at the game day hoping someone would play something interesting I could talk with them about. Meanwhile others stood awkwardly looking at complex games they were hoping they would not be asked to play. I brought the games Codenames and Forbidden Island with me. To my knowledge they didn’t get touched the entire night. I watched people fawn over a really neat looking yard sized checker set someone purchased on Amazon. Many people said they might buy one too, but no one actually played checkers at all.

Thankfully my friend Larry came up to me and asked me if I knew how to play Spades.

“Yep!” I said trying not to sound too enthusiastic.

“Would you like to be my partner?” he then asked.

“Yep!” I replied, happy to get into a game and away from my social anxiety and awkwardness.

Spades is a card game that can be played with a standard 54 playing card deck. Both jokers are removed to make a 52 card deck. It is typically a four player game with two players playing together on each team. Each player sits across from their teammate such that each turn iterates from one team playing to the other. Spades is part chance and part skill. While the cards are dealt to all players at random, it is up to the player by what strategy they play their hand. Measured on my chance/skill spectrum, I would rate it as being C50/S50.

Now Spades is one of those games in which I find it wise to tread carefully as far as the rules are concerned. Because of its wide popularity, the general faultiness of human memory, and the disregard many people have for reading written rules of any sort, many variations of Spades with their own house rules exist. I did my best to not be a bother and played by the rules the opposing team insisted were the correct ones. I still don’t really understand all of the arithmetic my opponent used to calculate our scores, but I can tell you his house rules math did not impede the fun we had playing together.

A starting dealer is selected. The dealer shuffles the card deck and deals out 13 cards to each player, which when dealt properly will exhaust the number of cards in the 52 card deck. With 13 cards in each player’s hands, there are thirteen tricks that will be played in each round. Starting to the left of the dealer, each player examines their cards and makes a bid for the number of tricks they believe they will be able to win.

A trick is won by being the player to play the highest ranked card in that moment of play. Rank is determined first by suit and then by number. By number, Ace is high followed by K, Q, J, 10, 9, 8, 7, 6, 5, 4, 3, 2. Spades are trump. Essentially whatever suit (clubs, hearts, diamonds, or spades) is led (played by the person who starts the trick), its highest ranking number will win the trick unless a spade is played, in which case the highest numbered spade will win the trick.

In the first round I examined my hand, noted that I had two aces (diamonds and clubs) and four spades with the Jack being the highest. Therefore I estimated I might be able to take four tricks. The bidding went around the table with everyone estimating the performance of their hands.

Since there are a total of 13 tricks, if one were to bid 13 and successfully take all of them they would receive 130 points. In this particular round, I bid 4 tricks while Larry bid 2. This gave us a combined bid of 6 tricks. When we finished the round, we had taken all 6 tricks, so we received 60 points. If we had not taken all of our tricks, we would have received -60 points. If we had taken 7 tricks, which is one beyond what we had bid, we would have received what was called a sandbag for a total of 61 points. Each sandbag is worth one point a piece, but if you get ten sandbags, you lose 100 points. Finally, if a player were to bid zero, it is called going nil. If a player successfully takes zero tricks while going nil, they will receive 100 points, but -100 if they fail.

In the first trick, everyone plays the lowest club in their hand. If the player does not have a lowest club, they may play any card. Whomever won the trick using the highest ranking card then leads the next trick. A spade cannot be played to lead a trick until a spade has been played in regular play to take a trick. When this occurs, spades are said to have been “broken.” A player may not play any card with a suit that is different from the suit that was led unless that player has no cards with the leading suit. Play continues until all 13 tricks have been won by a team. After the end of the 13th trick, the scores are recorded and play continues until a team reaches or surpasses 500 points thereby becoming the winner.

Our first round was fairly non-eventful. Both sides met their bids. They bid 7 tricks while we bid 6. We were confident everyone knew how to play by the rules. It was time to take it to the next level. In the second round they overbid in order to take more from us. When both team bids add up to 13 or less, both teams have the opportunity to be winners. But when the sum of all bids is higher than 13, someone has to lose points. Unfortunately for the opposing team, we made our bid which pushed their score negative.

In order to pull their score back up, one of our opponents went nil. She almost succeeded, but was forced to take the last trick which left them over 100 points negative. When a team is over one hundred points below their opposing team in Spades, the team is able to make a special bid called a blind nil. A team must announce they are going blind nil before any cards are dealt out by the dealer.

Once blind nil had been announced in our game, the dealer would shuffle the cards and then deal one card to each player who was participating in the blind nil. The player who received the lower of the two cards was called low. This would be the person working their darndest to take zero tricks in the next round. The player who received the higher of the two cards was called high and would bid as normal and would do everything they could to help their teammate take zero tricks. I am not sure what we would have done if both cards had come up with the same number value on them. Maybe we could have played War and drawn again, or allowed the players to then choose who would be high and who would be low.

Once the high and low player was determined, the dealer would once again shuffle the deck and deal out the cards as normal. The player designated as low would look through their hand to find their two worst cards for going nil (official rules is actually three cards I believe) and pass those cards to their teammate. Their teammate would then choose out of their hand the best two cards to use for going nil and hand them back to the teammate playing low. Play would then continue normally.

My partner and I continued to play fairly conservatively, continuing to receive points in moderation and a fair number of sandbags along the way as we attempted to set our opponents. The details of our opponents’ gameplay was a little fuzzy for me, since for the next three or four rounds they went double nil each round, sometimes winning and sometimes losing. Somehow the score right before the final round wound up with us both being roughly one hundred points from victory.

My eyes widened when I saw the score sheet. I was kicking myself for not going nil when I had received a hand with no spades in it. I decided to play it safe while I thought we were far ahead in points since I had an ace of diamonds. As it turned out though, while the other team needed points, our greatest danger would be to get too many sandbags and lose the points we already had that were necessary for victory. We entered that round with six sandbags, received two, and exited the round victorious. Larry makes a point of telling people that as a team we’re still undefeated champions. Time will tell. Maybe we’re just that good, or maybe we just quit while we were ahead.