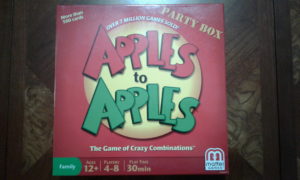 Apples to Apples: The Game of Crazy Combinations is a party card game released by Mattel. My copy is copyrighted 2013. The game is designed for 4 to 8 players, but I have played games with as many as 12 participants.

All red apple cards are shuffled together and randomly distributed across as many piles as is convenient face down. These are the draw piles for all players. All players draw five cards out of the red apple cards to compose their beginning hands. The green cards are also shuffled together into their own deck and placed in the middle of the table so everyone can reach them. 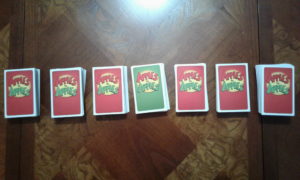 The rules state that the first person to win four green apple cards wins the game, but there is really no max number you have to stop at. The last time I played this game we exhausted the entire deck of green apple cards. Another interesting twist we made to our own game was to create a dummy player. Each round of play we would toss an additional random red apple card into the pile for the judge to examine. It was fascinating to see how well the non-player did compared to the actual human players around the table. In fact in the game I played last night, the dummy player actually came in second place!

There have been numerous times that I have asked people if they wanted to play Apples to Apples and they have wanted to know what it was. I would then explain it to them and they would say, “Oh, kind of like Cards Against Humanity? I’ve got that one, why don’t we just play that?” Apples to Apples is a family friendly game, while Cards Against Humanity is more adult themed with explicit content. Be aware of this if you are a newcomer to this genre and you want to keep your gaming experiences more family friendly for everyone involved. 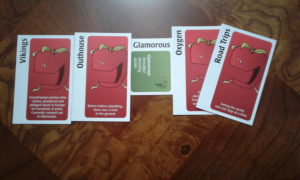 If you were judge, which would you pick?

Apples to Apples is probably my most frequently used go-to game to take to parties, especially those where I am unsure of the tastes of the hosts and whether they are gamers or not. Given that Apples to Apples is essentially an exercise in understanding other players’ psychology, this game acts as a good icebreaker to better understand and relate to the people I play with without bringing up any over the top embarrassing or offensive themes. One of the red apple cards is “Republicans” while another is “Democrats.” One of the red apple cards is “George W. Bush” while another is “Hillary Rodham Clinton.” I have been able to learn a lot about the people I play with based on the cards they play and how they talk about the subjects on the cards. We all learn a lot more about each other. Apples to Apples has probably helped me build rapport with those I have played it with more than any other game I own.

Any gamer who is serious about being a social gamer should have Apples to Apples in their collection. It’s easily available and fairly inexpensive in most stores with a toy section. I don’t even worry if my copy gets damaged because I know I can always get another copy. Meanwhile its benefits to opening avenues of conversation through a friendly game cannot be understated. I feel this game truly is a treasure to human society.