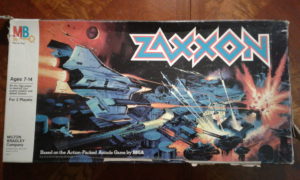 Zaxxon the Board Game

Zaxxon, published by Milton Bradley in 1982, is a board game designed after the hit arcade classic of the same name developed and released by Sega. Zaxxon is a two player game. The objective of the game is for each player to be the first to successfully shoot Zaxxon once using each of their planes. 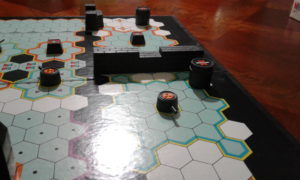 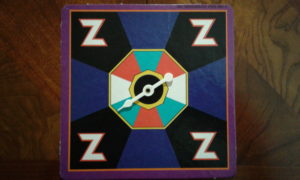 Zaxxon the Board Game spinner

After the spinner is spun, the player with the lowest roll moves their pieces the number of moves designated by the die they rolled. If they rolled a five, then they would have five movement points. Moving one position takes one movement point. Changing altitude takes one movement point. Firing at a target requires the number of movement points the plane is away from the target. In order to fire at a target, there must be a direct path through the hex grid from the plane to the target to fire in a straight line across the hex positions. A player may distribute their movement points across one or two planes any way they like and planes may move in any legal direction across the hex grid. A plane may not stop on top of a wall, so at least two movement points are required to clear any wall. After the player with the lowest die roll moves their planes, the player with the highest die roll then moves their planes. After all movement has been made, play continues in the next round as it did in the previous round with both players rolling their die together again. 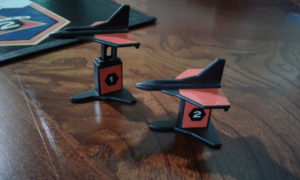 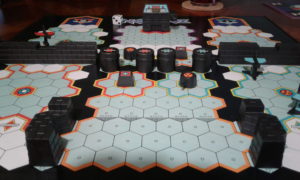 The dog-fight zone within the inner fortress

Right within the inner fortress, there are many spaces designated by open circles contained within an orange area. This is the dog-fighting zone. Players may shoot down their opponent’s aircraft here. Within this zone is a radar barrier. In order to send a plane through the radar barrier, the player must have rolled the highest of both players on that round of play. 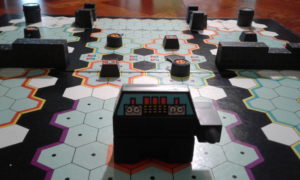 Zaxxon and its movement area

Once a player’s plane has entered the radar barrier, Zaxxon becomes alerted and activated. At this point in the game, whenever a player spins the spinner and it lands on a space with a “Z,” that player will move and fire Zaxxon based on the their roll of their die. Zaxxon cannot move beyond the area it inhabits designated by the dark black circles on the board, nor can the player’s planes enter this area. Zaxxon can shoot as far as the fuel tank positions in the inner fortress. Any player within those positions can be hit by Zaxxon.

As soon as we crossed the radar barrier, Zaxxon activated and moved up to the limit of his movement zone. We cautiously eliminated the front missile silo and gun turret in front of the fuel tanks and eliminated each of our fuel tanks when we were not eliminating each other. At one point we had four of our planes just outside Zaxxon’s range ready to take Zaxxon on. I sent one of my planes to the right-most side to flank it, and with a good roll managed a hit sending one of my planes back to home base and sending Zaxxon to his starting location. Using the same maneuverer with the second plane, I had to wait awhile until Zaxxon was back in position for me to strike again. As soon as the time was right, I got my hit and won the game. 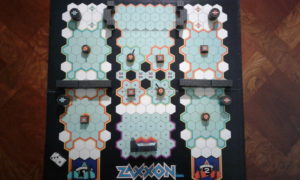 Bird-eye view of the game board

Zaxxon is probably the best arcade to board game adaptation I have ever played. The game is balanced between both players. The game board, pieces, and game play feel close to the original arcade game. And the board game creators did a satisfactory job of balancing the level at which skill and chance factor in winning the game. The Zaxxon board game is not difficult to learn, and takes around 20-30 minutes to play once you know what you’re doing. It is a pleasant game that is fun and original and doesn’t make you think too hard; a good board game when you’ve got time to kill with a friend who doesn’t want to play anything too involved or is a fan of arcade gaming but the power is out.