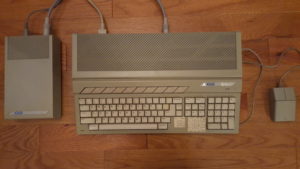 I successfully copied all of my 833 Atari ST disks into disk images and backed them up redundantly on multiple computer systems and a USB thumb stick. It took approximately a week and a half to completely copy all of the disks. The final archive size of all of these disks compressed is 182 MB.

The original method I was using to do the disk copying was directly on the Atari ST. A surprisingly often little known fact is that all Atari ST systems running Atari TOS version 1.04 or greater will fully read and write any 720KB or 320KB 3.5 inch floppy disk in MS-DOS format natively. I attempted to use this functionality by formatting a disk in double-density 720KB MS-DOS format using Windows 2000, place that disk into the external drive B of my Atari ST, and then copy the files directly from the Atari ST formatted 720KB disk in the internal drive A. This worked for multiple titles, but I discovered a glaring issue. The set of allowable characters in file and folder names on the Atari ST is greater than those for Windows 2000. Windows will not allow many special characters in file and folder names, including the infamous Atari Fuji symbol.

Thankfully, I found a program called FloImg. By installing a prerequisite Atari ST disk driver directly on my Windows 2000 system, I was able to copy the files directly from Windows into Atari ST disk images. I would title each disk image with a Windows file system friendly name and then the contents of the disk would just be available to the Atari ST emulator itself. Using Hatari as my emulator, I am constructing a hard disk image with all of my favorite files (mostly games) from these copied floppies.

It was surprising to me how many floppy disks copied with no errors after decades of storage. The oldest disks in my collection had file and folder modified dates dating back to 1985, over thirty years ago! Yet my data failure rate was just a little over one percent. In fact, many of the disks that did fail, I recalled having problems with when I was younger. I did notice that the Atari ST seems to read disks from start to finish. If there is a data issue on the end of the disk, but there is no required data there, the software seems to continue to function with no issue. I have actually had double-density MS-DOS IBM formatted disks fail completely to read in Windows, but then loaded them up on the Atari ST and dragged as many files off as could be read onto another disk for continued use.

Now that all of these floppies are successfully copied, it’s time to turn my attention to my Atari 8-bit, Commodore 64, and IBM 5.25-inch floppy disks. More information on that to come. Feel free to comment about your own fun floppy disk experiences below.