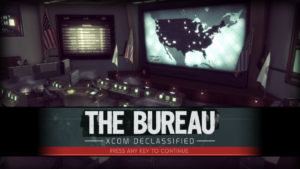 When I think of the XCOM series, I think of turn-based strategy and covert government agency management. I have fond memories of playing the first game in the series, XCOM: UFO Defense, with a close friend a few years after it came out in 1994. He found it in a bargain bin at a Tuesday Morning and talked his mom into getting it for him, much to our delight. The gameplay elements introduced in this first game were recreated in Firaxis Games’ reboot XCOM: Enemy Unknown released in 2012. In both of these games, the player recruits a squad of elite special forces soldiers to train and send on missions to defend against the extra-terrestrial menaces facing the planet while determining how government funding should be spent to best protect Earth’s security interests. The premise underlying these games provides intense potential for fantastic storylines across genres. And given the cult following of not only the original game, but also for shows like The X-Files, game developers worked to release other XCOM titles spanning other genres of gameplay. 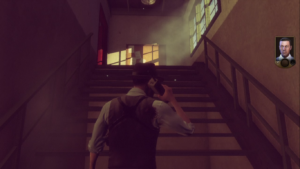 Just casually walking up these stairs at a reduced speed talking to my superior officer on the telephone while all mayhem is breaking loose around me.

When I first installed and played The Bureau: XCOM Declassified, published in 2013 by 2K Games and developed by 2K Marin, I thought it would be based on XCOM: Enemy Unknown from the previous year. Interestingly, development on The Bureau: XCOM Declassified began in 2010 and these games seem in most ways unrelated outside of them both having the player defend earth from extra-terrestrial aggressors. The initial events of the game occur in 1962 during John F. Kennedy’s presidency. I haven’t played the game far enough to know if the developers made it tie-in with the story of other XCOM games in the series. 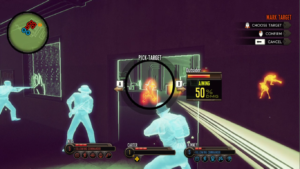 The Bureau: XCOM Declassified is primarily a third-person shooter with tactical elements. As the player receives new recruits throughout the game, they can press the spacebar to command those recruits to move to points of strategic cover and target specific enemy locations. The interface to this is similar in some ways to Tom Clancy’s Rainbow Six but happens from within the mission. Time slows down when entering what is called “Battle Focus Mode,” but does not stop entirely and the player is vulnerable while they are making decisions. 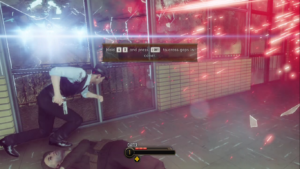 Ducked behind a barrier for cover on a two-dimensional plane.

In general, the core gaming mechanics require that the player seek cover behind objects while being shot at, and when the time is right, use the right mouse button to aim and fire at enemies. Aiming makes you vulnerable, so it is prudent to time your shots when the enemy is firing the least and is the most vulnerable themselves. The controls used to take cover seemed a little awkward to me. Left-shift while facing a wall or other such structure is supposed to enable the player to crouch behind it. Left-shift while moving forward is also supposed to make the player run. Once in such a defensive position, the player may then use A or D on the keyboard to move left or right respectively across the defensive surface. This maps a number of two-dimensional planes onto a clearly three-dimensional world that is at best confusing. I have yet to tell if I’m just not comfortable with the controls yet, or if there is actually a disconnect in some cases with how the game’s engine handles ducking behind a surface versus running around in the larger three-dimensional environment. 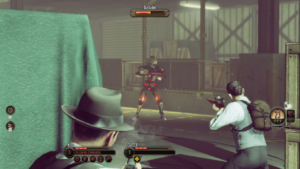 Right-Click to Aim and Shoot Aliens in the Face

The Bureau: XCOM Declassified is a very linear game divided into levels with cutscenes throughout to advance the storyline. The storyline is fairly typical for its genre, though rich enough thus far. It reminds me a bit of Resistance: Fall of Man. It plays much like the typical console third-person shooter, but without any save-point frustration that I have noticed thus far. The player may press F5 at any time to get a graphical overlay with the direction they game intends for them to go to progress, and any in-game objects that can be interacted with glow a bright golden yellow.

The Bureau: XCOM Declassified is unfortunately only single-player. I think it would be incredible to have an arena in which players may strategically command their squad while simultaneously participating in a classic deathmatch. Perhaps someone could eventually release a mod for the game to accomplish this.